Seven offshore fields producing 400 barrels per day but production set to peak at 7,000 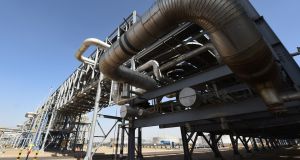 Much of the funds raised will be earmarked for a drilling programme in Gabon in west Africa. File photograph: Getty Images

The Africa-focused exploration company was founded five years ago by a group of Tullow Oil veterans. Sources said the company and its advisers at Davy, and London-based financial firms Shore Capital and Hannam & Partners, are confident that anchor investors will be signed up in the coming weeks, paving the way for a flotation on the junior Dublin and London stock exchanges during the traditionally very quiet market period in the second half of August.

The company, led by executive chairman Pat Plunkett, who chaired Tullow Oil between 2000 and 2011, plans to use much of the funds for a drilling programme in Gabon in west Africa, where it agreed last year to buy a 45 per cent interest in a producing asset in a potentially transformational deal.

The so-called Owali Asset, comprising seven shallow-water offshore fields, is producing 400 barrels of oil per day. But potential investors have been told that production is expected to peak at 7,000 by the end of the decade from the fields. The company also owns 90 per cent of an exploration block, known as Louga, in Senegal.

A long-term incentive plan being planned at T5 Oil & Gas – which has set itself the ambition of ultimately becoming a “publicly-listed billion-dollar” exploration and production company – would entitle top executives to share options of up to a maximum pool of 10 per cent of issued share capital over the space of a decade after an IPO. It will be subject to varying performance hurdles.

T5 Oil & Gas raised an initial $5 million in seed capital in 2014 in a transaction led by corporate finance boutique, Raglan Capital. The company made an abortive attempt in 2015 to buy Egyptian production assets owned by Petroceltic.

The company raised a further $4.5 million late last year through the issuance of convertible loan notes, with the proceeds used for an initial payment due on the Gabon deal.

T5 Oil & Gas ultimately aims to have a broad portfolio, 40 per cent of which would be made up of producing assets acquired from distressed sellers or as part of major divestments. It plans to have a further 40 per cent of its assets in development projects, with the remaining 20 per cent in either onshore or in shallow water explorations.

Representatives from the company declined to comment on the IPO plans.

Mr Plunkett’s 11-year chairmanship of Tullow Oil was marked by the company’s market valuation soaring from about £250 million (€280 million) to £12 billion. The former stockbroking executive was hired two years ago as chairman of Providence Resources, the Tony O’Reilly jnr-led company focused on exploring for oil and gas explorer off Ireland’s shores.