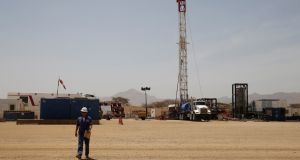 African oil executive Samuel Dossou-Aworet has built up a stake of just over 7 per cent in Tullow Oil, taking advantage of a slump in the oil exploration group’s stock in the past five weeks to become its main shareholder.

The Benin native co-founded a pan-African exploration company called Energy Africa in 1994, which was acquired by Tullow Oil 15 years ago for $500 million (€448 million). The transformational deal doubled the size of Tullow at the time, giving it assets from Ghana to Namibia along the west coast of Africa.

The businessman (75) also co-founded and chairs Petrolin Group, an international petroleum company whose activities include taking stakes in oil exploration projects and companies in the sector in Africa, trading crude, and providing advice and services for oil companies and state entities.

Tullow’s shares have slumped more than 70 per cent since the middle of November, initially on news that oil discovered recently off the coast of Guyana in South America was found to be heavy and high in sulphur, making it costly, and possibly commercially unviable, to extract.

The stock went into freefall last week when Tullow cut its oil production forecasts for the coming years, suspended its dividend, and announced that its chief executive Paul McDade and its exploration director Angus McCoss had quit.

A stock exchange filing on Tuesday showed that Mr Dossou-Aworet had built up the stake through five companies, including Petrolin Trading.

Shares in Tullow jumped 4.5 per cent to 63.6p in London as the market digested the development and shrugged off news just before trading ended that Moody’s had become the second credit ratings agency to downgrade its stance on the company in five days.

“The significant downward revision in Tullow’s projected production will lower its future cash generating and debt reduction capacity,” said Moody’s. “This will in turn reduce the group’s financial flexibility to grow and diversify its production profile in the future by developing its existing hydrocarbon resources in Africa and pursuing exploration activities.”

Last Friday, Standard & Poor’s downgraded its credit rating on Tullow, saying: “Although we understand that [Tullow’s] plans to use its financial flexibility to offset the lower profitability and maintain positive free cash flow, we see a less robust business that has weaker credit metrics.”

Tullow has also been the subject of a slew of stock recommendation downgrades from analysts in the past week, including one on Monday from analysts at HSBC, who raised questions about company’s ability to fund key projects in Kenya and Uganda.

Tullow chairwoman Dorothy Thompson insisted last week that while the group remains committed to selling down stakes in the Kenya and Uganda assets, it will not engage in a fire sale.

The HSBC analysts said that Tullow, which has managed to reduce its debt burden in recent years with the help of a £600 million (€705.5 million) shareholder cash call in early 2017, will probably see its deleveraging accomplishments reversing in 2020.