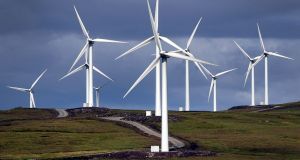 Renewable energy such as wind is helping to bring down the wholesale cost of electricity. Photograph: Ben Curtis/PA Photo

Wholesale electricity prices are falling as the cost of gas drops and the impact of renewable energy increases, according to a new report.

Independent supplier Naturgy says in its annual review and forecast that businesses’ energy costs fell in 2019, aided by a record 40 per cent drop in gas prices, prompted by increased supplies of the fuel.

About 60 per cent of the Republic’s electricity is generated by burning natural gas, so a fall in the fuel’s price helps cut the cost of producing power.

Naturgy’s reports states that in the final quarter of 2019, wholesale electricity prices averaged €41.81 a mega watt hour (a megawatt hour provides enough energy to power about 1,000 homes for an hour), 42 per cent less than the same period in 2018.

Keith Donnelly, Naturgy’s billing, commercial and pricing manager, said the current outlook was for electricity costs to fall in the new year, as forward prices are linked to natural gas.

However, he points out that periods of cold or stormy weather could push gas prices back up.

Mr Donnelly also noted that continued falls in the wholesale price could lead to an increase in the public service obligation (PSO) that the State levies on all electricity users.

The monthly charge, €2.84 for households and €10.35 for small businesses, funds the guaranteed prices paid to renewable energy generators such as wind and solar farms.

“With power prices relatively low and, all things being equal and market conditions continue into the new year, the PSO levy in 2020/2021 may need to be increased as renewable support prices are higher than current market prices,” he said.

On the 50 windiest days since the new market came into effect, wholesale electricity prices averaged €38.57 a megawatt hour. On the 50 least windy days, the price almost doubled to €65.60 MWh, she said.

As the new market came into effect, the difference between the price of wholesale electricity and the cost of generating it using natural gas widened.

However, Mr Donnelly said this “spark spread” is narrowing as participants are used to the new marketplace, meaning that forward prices should drop.

‘The Brexit loan scheme was a great initiative and it has helped us continue to grow’ 05:58
Hospitality industry hoping it isn’t afflicted by US coronavirus fears 05:23
‘The only time apartments were viable was in . . . Ballsbridge, Killiney and Dalkey’ 05:08
Why Irish banks are now looking beyond vulture funds on problem loans 05:04
We have little chance of building enough homes to meet election promises 05:00

1 Corona beer firm reeling after 8% slide due to coronavirus
2 Pharma giant AbbVie warned Government against ‘unfair’ €572m tax bill
3 Life as a Facebook moderator: ‘People are awful. This is what my job has taught me’
4 ‘The only time apartments were viable was in . . . Ballsbridge, Killiney and Dalkey’
5 Why Irish banks are now looking beyond vulture funds on problem loans
6 Flight attendent seeks High Court injunction against Aer Lingus
7 How well paid do you think you are? Here’s how to work it out
8 Survey finds shift from cash to its virtual equivalent now at tipping point
9 We have little chance of building enough homes to meet election promises
10 High time: Netherlands moves to clean up absurd cannabis policy
Real news has value SUBSCRIBE