Environmentalists and timber industry at loggerheads over licence appeals 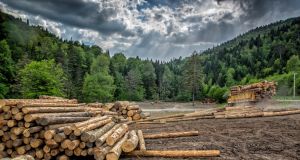 FII has warned that the number of appeals against forestry licences, combined with the slow pace at which the committee deals with them, could close sawmills and leave the Republic short of vital timber. Photograph: iStock

Environmentalists oppose Government proposals to charge for forestry licence appeals, while sawmillers want the grounds for such challenges tightened.

The deadline for public comments on proposed changes to laws allowing almost anyone in the Republic to appeal forestry licences, needed for tree-felling, planting and road-building, passed at the weekend.

A submission by Friends of the Irish Environment (FIE) argues that proposals to charge for forestry licence appeals are unacceptable in light of a 2003 EU directive and the 2012 Aarhus Convention, ratified by the Republic, which protect the public’s right to participate in decision-making on environmental issues.

FIE also cites the UN’s 2013 Sustainable Development Goals, which, among other things, require the Republic to sustainably manage forests. These goals are the basis of the EU’s recent Green Deal, the organisation adds.

The organisation says each appeal should have precise grounds relating specifically to an individual licence. Appellants should provide evidence for their challenges and state their specific interest in the permit they are challenging.

FII welcomes the proposal to introduce a charge for appeals and plans to allow the Forestry Appeals Committee greater flexibility and wants the department to provide more resources to the body. It says challenges should be dealt with in 60 days.

The proposed amendment to the Forestry Act, 2014, is one of two steps the Department of Agriculture says it is taking to tackle the problem. It has also pledged to hire more staff for the appeals committee.

FIE director Tony Lowes pointed out that the introduction of a charge for planning appeals cuts the number of such challenges by more than half. “It’s a barrier that’s intended to discourage people from participating,” he said.

The amendment does not say what the charge might be, but it could be €20, a sum that Mr Lowes suggested not many people could spare.

Environmentalists say local communities fear the impact that large plantations of the non-native conifers used for commercial timber will have on their areas.

While commercial forests frequently include some native deciduous trees, such as birches, Mr Lowes argued that these were often used to screen much larger swathes of evergreens.

He also pointed out that rock phosphate used to fertilise can leak into rivers, where it causes algae blooms, a form of pollution that depletes oxygen, threatening fish and other aquatic life.

FII has warned consistently for several months that the number of appeals against forestry licences, combined with the slow pace at which the committee deals with them, could close sawmills and leave the Republic short of vital timber.

Along with the loss of jobs, this could force builders’ suppliers to import timber at higher prices than those charged for the homegrown material, driving up building costs, which will hit families seeking their first home.

Coillte, the State forestry company, has written to Taoiseach Micheál Martin, warning of the shortage.