No deal Brexit could impact some types of electricity trading - Bruton 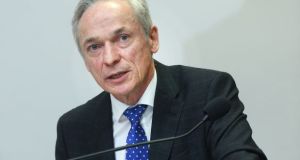 Minister Richard Bruton told Green Party leader Eamon Ryan that in response to the possibility of blackouts in the North, it was planned to bring coal-fired power plants there that were due to be decommissioned back into service, if needed. File photograph: Finbarr O’Rourke

Because of the risk that Britain will leave the EU without a deal, emergency legislation will have to include measures to ensure supply of electricity on a north-south basis is maintained, Minister for Communications, Climate Action and Environment Richard Bruton has confirmed.

Mr Bruton said supplies of oil, gas and coal would not be disrupted in the event of a hard Brexit but the situation with electricity was more complicated because of the single market operating on the island of Ireland – known as I-SEM.

Speaking at a meeting of the Oireachtas Committee on Communications, Climate Action and Environment on Tuesday, Mr Bruton said the absence of a deal would mean some types of electricity trading could not take place. Strictly speaking, these would not be in compliance with EU law, though the UK has committed to being compliant with such legislation.

The Government, none the less, felt it was prudent to ensure powers were in place for the Commission for Regulation of Utilities “in the event of certain things happening”, though they were not considered likely. The reserved powers would allow the CRU to alter licences on electricity trading. Details will be provided in legislation to be published later this week.

In response to Deputy Brian Stanley (SF), Mr Bruton said World Trade Organisation tariffs did not apply to electricity or gas, so consumers would not face increased costs due to Brexit.

He agreed with Fianna Fáil TD Timmy Dooley that Brexit and increased demand in Ireland for electricity, including the consequences of increasing numbers of data centres, brought into sharper focus the need for the proposed Celtic Interconnector between the Republic and France.

He told Green Party leader Eamon Ryan that in response to the possibility of blackouts in the North, it was planned to bring coal-fired power plants there that were due to be decommissioned back into service, if needed.

Mr Ryan said there was a need for an integrated power network across the entire region of north western Europe including the UK. “We should be frank about that,” he added.