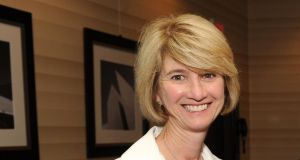 Dr Kristina Johnson: “I had this crazy idea of an all-in-one system on an electric car which has solar panels on the roof and its own charging station.” Photograph: Larry Busacca/Getty

Former US energy under-secretary Dr Kristina Johnson doesn’t carry a crystal ball around in her bag, but she wouldn’t have been the least bit surprised by Bord na Móna’s announcement that it planned to pull out of peat harvesting by 2030.

She would have been as familiar as any student with the benefits of a bale or two of peat briquettes during her time as a post-doctoral fellow at Trinity College, Dublin (TCD) in the early 1980s.

Back then, the idea that Irish fireplaces might no longer burn turf would have probably sounded as far-fetched as the recent confirmation by the British government that renewables outstripped coal for the first time in its energy mix this year.

As US energy undersecretary in the first Obama administration, she played a role in formulating the American Recovery and Investment Act 2009 which “set the stage” for doubling the amount of renewable energy use.

“This was a big step forward at the time, but now it is making economic sense to people,”she says.

She believes we are all becoming “prosumers” , or “professional consumers”, and the days of dealing with the big large energy provider are numbered. “We are outgrowing the 20th century model for energy provision when demand was increasing, and there was a centralisation of power supply,”she explains.

In the first years of the recent economic downturn, Ireland also recorded a 12 per cent drop in energy use – the second highest decrease in the EU after Lithuania between 2008 and 2011.

“Formerly, one was at the mercy of a central energy plant in the US, but now the grid operator sits between generator and consumer, and the grid operator is selling capacity – or offering to pay – not to produce.

“The central utility in the US is being replaced by community networks, microgrids and even people moving off the grid entirely,”she notes.

About half of renewable energy in the US comes from hydro power and the balance is drawn from solar, wind and biomass/geothermal.

Dr Johnson,who is on the board of NUI Galway’s Ryan Institute and holds an honorary degree from TCD, is chief executive of the hydropower company, Cube Energy. She is expected to inform energy policy in former US Secretary of State Hillary Clinton’s presidential bid, and has written a thought piece on the role of hydropower in renewable strategies and infrastructure.

“The problem is that coal is going to cause climate devastation, and I am keen to lay the stage for what it would take to ‘leapfrog’ coal,”she says – well aware that coal still generates more than 40 per cent of the world’s electricity.

“You see how in African states people have a photo-voltaic device the size of an iPhone which doubles up as a charger and phone,” she explains.

The one drawback with the “prosumer” energy market is the fact that those on low incomes may not have the same access, she notes.

“Someone has to pay for those lines and installed capital,” she says. “In Hawaii, they are very interested in installing community schemes in low income housing, where one can be a prosumer and one is not burdened with a distribution and transmission charge”.

Ireland, she believes, is just the right size for a similar prototype. “Our challenge in the energy sector is to go right to the consumer and build a software platform that allows people to buy directly from us, rather than from a utility,” she says.

However, there has to be a financial incentive, which moves beyond the paralysis induced by the prospect of climate change. Nest’s “smart” thermostat, bought by Google last year, is already saving home energy bills, and “peakshaving” software shuts down devices which are not used all the time.

As an engineer, she has been watching the work of South African/Canadian/US engineer and inventor Elon Musk in electric car development.

“You see it happening now, where you will be able to charge your car at night, based on solar panel energy collected during the day, and will appeal to the fierce independence in the west of the US.”

Micro-lotteries can give people a stake in positive initiatives, by offering rewards to about 3 per cent of the group, she says. She cites the work of Stanford professor of electrical engineering and computer science Balaji Prabhakar, who introduced credits for drivers at his university who changed their commuting times to avoid traffic congestion.

“I’d like to see someone working on an app that looks at my diary for the week and sees how I can optimise the various dates and events listed to minimise lost time and gasoline in traffic congestion,”she says.

“Gamification”, as in applying the elements of game playing to other areas of activity, could make energy saving fun, she says. “For instance, where people in different buildings in a university, or houses in a neighbourhood, compete to see who has the lowest energy bills and where they use ‘sense’ amps to cut down on what we call wasted energy or vampire power,”she says.

These small changes could have an enormous impact, she says, and the psychology behind behaviour change is key, in her view. Crowdsourcing of renewable energy makes sense, she says – particularly with a generation that has been brought up to appreciate the potential.

“In big corporations, management has to respond to shareholders with quarterly returns, whereas crowdsourcing doesn’t have those limitations,”she says.

“When I lived in Ireland during Bob Geldof’s Bandaid appeal, I remember that Ireland raised most dollars per capita of any country in the world,” she says. “That was a time when most of my friends here were unemployed ,”she says.

“So the heart and the awareness and the action is very special in Ireland, and crowdsourcing of renewable energy would be a very cool thing to do.”