Mainstream has raised over €1.8bn in project finance and employs 200 staff in four continents 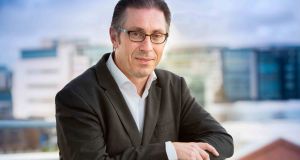 Mainstream Renewable chief executive Andy Kinsella: ‘We are ready to embark on a significant expansion of our core Asia Pacific, Latin America and African markets.’

Emerging-markets focused wind and solar energy group Mainstream Renewable Power has promised “material growth and returns” to shareholders over the next decade.

The Dublin-based company made the pledge after posting a record €487.5 million profit last year which compares to a €5 million loss for 2017. This was driven by the group’s sale in 2018 of a Scottish off-shore wind farm for up to €650 million to French utilities giant EDF. The deal also allowed the company to repay all its debts and buy back shares and warrants held in the business by UK bank Barclays, Japanese trading house Marubeni and Australian financial group Macquarie.

Mainstream, set up in 2008 by green energy entrepreneur Eddie O’Connor and backed by wealthy Irish people and staff, opened a temporary grey market for trading of its stock late last year. This marked 10 per cent of its shares changing hands at €9 a piece, representing a 300 per cent return on the original cost of the stock.

“The return to our core ownership structure means we are set to deliver material growth and returns for shareholders over the next decade,” said group chief executive Andy Kinsella in the company’s annual results statement.

“We are ready to embark on a significant expansion of our core Asia Pacific, Latin America and African markets, as well as returning to the UK’s offshore wind sector.”

Mr O’Connor, the company’s chairman, increased his stake to 55 per cent from 42 per cent as Barclays and Marubeni’s shares were repurchased and cancelled.

Is a flotation imminent?

The company is on track to raise a further €700 million and €900 million of additional funds this year, it said. Mainstream has raised more than €1.8 billion in project finance to date and employs 200 staff across four continents,

Globally, it has delivered more than 800 megawatts (MW) of wind and solar assets – the equivalent of about 13 per cent of Ireland’s peak electricity demand – into commercial operation and is building more than 700MW across Latin America and Africa.

In Chile, the company wholly owns 1,300MW of fully contracted renewable energy projects which are on track to go live from 2021.

While Mr O’Connor has long flagged the possibility of the company floating on the stock market, Mr Kinsella said last year that it would more likely be sold on rather than go through an initial public offering.