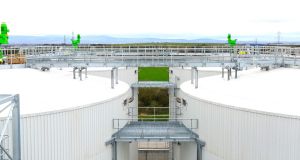 Energia’s new bioenergy plant will be fully operational by the end of 2019. Photograph: Shane O’Neill/SON Photographic

Energia has agreed a €44 million debt finance package with AIB for its bioenergy plant under construction in north Co Dublin.

The energy provider and infrastructure investor said the package includes an 11.6 year term loan of €38.6 million and ancillary facilities of €5.4 million. It forms part of an overall investment of about €50 million. The first tranche of funds were drawn down at the start of this week.

“AIB is strongly committed to the renewables sector and climate action, and we are delighted to be working with Energia on this important project,” the bank’s chief executive, Colin Hunt, said.

The new bioenergy plant, located beside the company’s existing two major power stations in Huntstown, will be fully operational by the end of 2019 and will generate 4.8 megawatts of electricity per hour, enough to power about 8,600 homes.

These facilities add to Energia’s existing services supplying about 25 per cent of Ireland’s total energy and 21 per cent of the country’s total wind power. It supplies over 1 gigawatt of green power to the market including from 22 owned and invested wind farms on the island.

Chief executive Ian Thom said the company is committed to delivering renewable and sustainable projects across the island. “We are now providing a long term renewable energy solution utilising a portion of Dublin’s waste,” he said.

The bioenergy plant will use anaerobic digestion to convert organic waste, such as garden or food waste, into methane-rich biogas which will then generate renewable electricity. Elements of the material remaining after the process can be used as organic fertiliser for crops and gardens.

When fully operational, the plant will be one of the largest of its kind on the island of Ireland.

The move follows Energia’s recent commercial agreement with Panda Waste to process a minimum of 70,000 tonnes of organic waste annually at the bioenergy plant. Panda will begin supplying organic waste from June which will come from its black and brown bin collection services across greater Dublin. The deal is expected to be worth up to €50 million to Energia.

Viridian, Energia’s parent company which also owns Power NI in the North, services about 750,000 customers on the island of Ireland. Energia itself has a significant presence among SMEs, providing about a third of all Irish SMEs with gas or electricity or both.