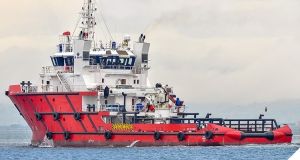 Shipping company Irish Mainport Holdings is seeking a foothold in the offshore energy business with the purchase of a survey and research vessel.

Cork-based Irish Mainport said on Monday that it has bought a 50-metre survey ship, the Oya, and taken a minority stake in Wicklow offshore services player, Alpha Marine.

Dave Ronayne, Irish Mainport’s chief executive, said the Oya originally cost $15 million (€12.9m) to build, but added the Irish company paid less than that for the ship. “It was an opportunistic buy, we got a very good price,” he said, adding that the actual figure was confidential.

He explained European energy giants such as EDF, Innogy and Statkraft, which are planning to invest billions of euro building offshore wind farms, in the Republic’s waters are going to require sea bed surveys.

“The seabed can be as mountainous as land, so if you are laying a cable or doing other work you have to have a very detailed survey,” he said.

Mr Ronayne noted buying a share in Alpha Marine would give Irish Mainport a presence on the east coast, where the large offshore developments are planned, and allow both businesses to pool their strengths.

“The good thing is that this is a coming together of two Irish companies,” Mr Ronayne said.

He added that a lot of wind-power developers could otherwise look to British or European businesses for support services.

Irish Mainport operates three tugboats in the Shannon Estuary, a dedicated supply ship to the Kinsale gas field, along with agency and stevedoring businesses in Cork and Limerick.