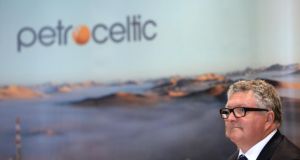 The author of allegedly defamatory material posted about Irish-based exploration company Petroceltic International, and two of its executives on a blog, is a “malicious mischief maker”, a High Court judge has said.

Mr Justice Michael White said on Tuesday the blog, which had appeared on blogging site WordPress.com, before being taken down by Auttomatic, the US owner of the world’s most popular blogging software, had been “set up to abuse” the company and its directors.

Last month Petroceltic, which is headquartered in Dublin, had obtained court orders directing Aut O’Mattic A8C Ireland Limited, a subsidiary of Automatic Inc, and Auttomatic Inc to identify the author.

For legal reasons the blogger’s remarks or username cannot be reported.

The judge said he was conscious of the difficulties experienced in policing the website, but Auttomatic Inc had also a responsibility to be aware that the blogger was “mischievous.”

He adjourned the case for mention to a date next month.