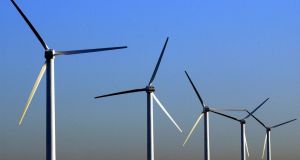 The State adds the levy to all electricity bills to pay for price supports given to renewable energy generators, such as wind farms. Photograph: PA

Regulators are set to cut the State’s so-called green energy levy in half, knocking more than €262 million off business and household electricity bills, from next October, but the move is unlikely to cancel out recent price rises.

The Commission for the Regulation of Utilities (CRU) plans to cut the public service obligation levied on all electricity bills by 56 per cent from October to €209.19 million from €471.9 million under the current scheme.

The State adds the levy to all electricity bills to pay for price supports given to renewable energy generators, such as wind farms.

Figures in the CRU document detailing its decision to cut the charge show that bigger businesses that use most electricity will gain most from the move.

These organisations, which include large manufacturers such as pharmaceutical plants, contribute €97.08 million of the total, less than half the €210.95 million they are expected to contribute under the current levy.

However, the reduction appears unlikely to compensate for recent domestic price hikes. From the beginning of this month, Electric Ireland, part of State-owned ESB, increased its electricity charges by 6.2 per cent.

The ESB calculated this would cost a typical household an extra €4.68 a month, including VAT. As the company charges most customers every two months, this would add €9.36 to a typical bill, while the green energy reduction would save €8.42.

Electric Ireland’s independent rival SSE Airtricity increased its electricity charges by 6.41 per cent, which it calculated would add €59 a year, or slightly more than €4.91 a month, to a typical household bill.

Both the ESB and SSE Airtricity benefit from the levy as they own large numbers of wind farms. Wind farm operators will receive €185 million from the total collected from businesses and consumers under the levy.

Other beneficiaries will include Viridian and Bord Gáis Energy, the former State company now owned by British utility Centrica, which are also big players in wind generation.

The levy is applied for 12 months beginning every October. Overall the CRU will collect €209.19 million from electricity users over the year beginning in October, when the planned reduction kicks in.

The current levy, imposed in October 2017, is expected to yield €471.9 million. The CRU says that one of the reasons for cutting the charge this time around is that this figure turned out to be €115 million more than was needed to compensate the energy suppliers that benefit from the scheme.

Since the Fianna Fáil-Progressive Democrats coalition originally introduced the levy to support investment in renewable electricity, all subsequent governments have maintained the policy and the charge.

The levy has risen steadily in recent years as the number of renewable energy generators has grown.