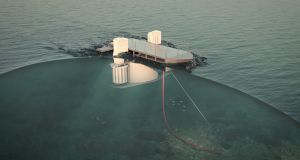 A Limerick company which secured EU funding for renewable energy research and development has cancelled plans to test its device on the Shannon estuary, citing planning delays.

DesignPro Renewables of Rathkeale, Co Limerick says issues raised by the National Parks and Wildlife Service have forced it to withdraw a foreshore licence application to test its 60kW hydrokinetic turbine device on the river Fergus in the upper Shannon estuary area.

It will now seek an alternative location in either France or Canada to ensure it meets timeline targets set by EU Horizon funding.

The company, which employs 56 people, secured EU grant-aid of €1.95 million for the €2.7 million project, and had hoped to deploy its turbine device in January next year for 12 months of testing.

The EU Horizon2020 grant aims to facilitate development of the small-scale hydrokinetic turbines – generating energy from river and estuary flows – to a commercial scale.

The company plans to deploy a 25kW turbine device at a certified test site in Bordeaux, France.

A foreshore license application submitted in April for the river Fergus site required environmental data, including a survey of migratory birds.

The Shannon and Fergus estuaries special protection area is the State’s largest estuarine complex and is regarded as the most important coastal wetland site. It is home to more than 50,000 water fowl during the winter, including internationally important pale-bellied Brent goose, dunlin, black-tailed godwit and redshank, along with curlew, lapwing, black-headed gulls among 17 other species.

The estuaries area also has populations of whooper swan, golden plover and bar-tailed godwit, all of which are on the EU Birds Directive annex 1 list of protected species.

The company says the bird survey submitted as part of the foreshore licence application omitted one strait of water which is close to the test site, and the wildlife service required the carrying out of a complete new survey.

“This would have taken a year, which is beyond our timeline for the EU funding,” DesignPro Renewables business development associate David Higgins said.

The company says the local community, Clare County Council and Shannon Foynes Port Company were supportive of the project, and it still hoped to return to the Shannon estuary at a future date.

Róisín McCormack, of DesignPro Renewables, said that stakeholders had been informed that the company was tied to EU Horizon 2020 timelines.

“Unfortunately, having pushed it out as long as we could, we had to make the call on it this week,”she said.

“The local community has been fully behind this,” former Fine Gael councillor Oliver Garry, based in Kildysart, said. “We are very disappointed as this is an environmentally-friendly project, but we would hope the company will return at a future date.”

The wildlife service did not respond to a request for comment.