Why are Canadian oil groups investing in Irish forecourts? 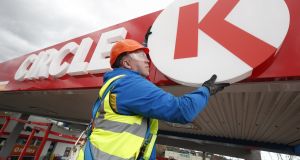 Canada’s Alimentation Couche-Tard is currently rolling out its Circle K brand at about 420 service stations around the country. Photograph: Conor McCabe Photography

Irving Oil’s announcement this week of a deal to takeover the Tedcastle group of companies, for something north of €100 million, brings a second Canadian company on to Irish forecourts in three years. The deal gives Irving control of the Dublin-headquartered Top Oil brand, which recently expanded operations into company-owned retail forecourts and aviation fuel.

Top Oil sells more than 1 billion litres of fuel every year to commercial and residential consumers, and has 200 dealer and company-owned forecourts.

In 2015, Canada’s Alimentation Couche-Tard acquired Topaz from Denis O’Brien, and is currently rolling out its Circle K brand at about 420 service stations around the country. It is now the biggest fuel supplier in the country.

Why have two of Canada’s major oil groups invested in a small country like Ireland?

It might be coincidence or it might be the fact that Ireland’s economy is the fastest growing in the European Union. Traffic volumes are rising again post-recession and there is now a record 2.7 million vehicles on Irish roads.

And with no nuclear power, our per capita use of oil is high compared to many larger economies. Then again, fossil fuels are on borrowed time, and heavily taxed at the pumps (some two thirds of the price of a litre of petrol or diesel here goes to the exchequer). The future is more about charging points than fuel pumps.

On the plus side, convenience retail is strong in Ireland and margins are fatter on sales in the forecourt shops rather than at the pump. Some 67 per cent of Applegreen’s gross profit in the Republic last year came from non-fuel sales, a much higher percentage than at its operations in the UK (53 per cent) or the United States (52 per cent).

Top is mostly based in the regions so there could be growth potential for Irving in Dublin (where it has just eight outlets) and other urban areas.

The real curiosity was that Irving Oil bought the Whitegate Refinery in Cork two years ago. Whitegate had long been regarded as too small and inefficient to be worth the bother. The Tedcastle deal is perhaps a case of Irving following its money here to make the numbers work.