Top Oil brand is to be retained and there will be no job losses, buyer says 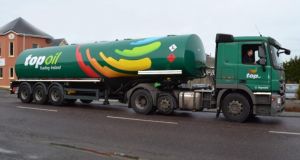 Irving Oil, the Canadian owner of the Whitegate refinery in Cork, has acquired the family-owned Tedcastle group, which operates the Top Oil brand, in a multimillion-euro deal.

Dublin-headquartered Top Oil, which sells more than a billion litres of fuel every year to commercial and residential customers, is a supplier of home heating oil, commercial and agricultural fuel.

The company, which has a 200-year trading history, owns a 55,000 tonne import terminal at Dublin Port and more than 200 service stations. It also has 20 inland depots and 20 dedicated fuel card sites.

The original company was founded in 1800 by Robert Tedcastle to import and distribute coal in Dublin. It rebranded from Tedcastles Oil Products to Top in 1996.

The parent, Tedcastle Holdings, recorded turnover of €1.1 billion in 2017 and employs 470 people.

“This is a very significant day for the extended family and our business in Ireland,” said Tedcastle Holdings deputy chairman Raymond Reihill. “We are delighted to hand over the reins, on completion of these agreements, to another family company and are confident that the business will continue to grow and prosper.”

The Reihill family were advised on the deal by corporate and commercial law firm LK Shields.

The acquisition requires approval from the Competition and Consumer Protection Commission. The Top Oil brand is to be retained and there will be no job losses, Irving said.

Irving acquired the Whitegate oil refinery in Cork from Philips 66 in August 2016. Recently-filed accounts show profits at the refinery, which provides about 40 per cent of Irish petroleum needs, reached €58 million in 2016.

Irving Oil is a family-owned group that operates Canada’s biggest refinery, in New Brunswick, which handles 320,000 barrels a day. The group supplies wholesale and retail customers in Canada and the United States.

The financial details of the deal have not been released but it is expected to be one of the biggest merger-and-acquistion deals of the year in Ireland.