Interim examiner appointed to OpenHydro in bid to revive company

Counsel says potential investors are interested in getting involved, and the technology is ‘on the cusp’ of being commercially viable 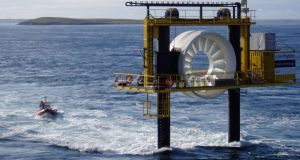 The High Court has appointed an interim examiner to the OpenHydro group which specialises in developing turbines that generate electricity from tidal energy.

Ms Justice Miriam O’Regan on Friday appointed insolvency practitioner Ken Fennell as interim examiner to Dublin-based OpenHydro Group Ltd and its subsidiary Open Hydro Technologies Ltd after being informed that an independent experts’ report had shown the companies had a reasonable prospect of survival if certain steps were taken.

These include securing new investment, restructuring the group and the appointment of an examiner who would put together a scheme of arrangement with the group’s creditors that would allow it to survive as a going concern.

The application for examinership comes just weeks after the High Court appointed Michael McAteer and Stephen Tennant of Grant Thornton as joint provisional liquidators to the firms after being told both companies were “seriously insolvent.” with debts of approximately €280 million.

The appointment of provisional liquidators was sought by OpenHydro’s French parent and largest shareholder Naval Energies, which had invested €260 million in the firms, The firm said it was no longer prepared to support the enterprises because the companies were loss-making.

The company has operations in Ireland, Scotland, Canada, France and Japan.

On Friday, Neil Steen SC for a group of shareholders that own 12 per cent and were involved in the setting up of OpenHydro, told the judge that his clients believe that putting the group into examinership would be more advantageous to all parties.

Counsel said that his clients were attempting to “revive the company”, adding that the group’s 100 employees were being let go by the provisional liquidators.

Counsel said that new potential investors were interested in getting involved, and added that the technology was “on the cusp” of being commercially viable.

Already one of its turbines, located in the Bay of Fundy in Nova Scotia, Canada, was generating electricity, and was plugged into the Canadian power grid shortly before the provisional liquidators were appointed, counsel added.

Counsel said while provisional liquidators have been appointed no resolution has been passed for the winding up of the group.

Ms Justice O’Regan, who noted that the application was unusual given that provisional liquidators had been appointed some weeks ago, said she was prepared to appoint Mr Fennell as interim examiner.

As a result of the ruling, the provisional liquidators will cease to act. The matter was adjourned to next Tuesday’s sitting of the court.