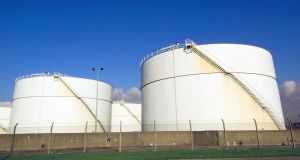 Following talks on Thursday, OPEC, Russia and other allies outlined plans to cut output by more than a fifth

Oil producers in the OPEC+ group, led by Saudi Arabia and Russia, were expected to pressure Mexico on Friday to seal an accord for a collective cut in output of 10 million barrels per day (bpd), before asking other nations for a further fivemillion bpd of cuts.

The US has encouraged global cooperation to bolster an oil market that collapsed as the coronavirus pandemic accelerated in March and producers resorted to a price war after failing to agree on how to prop up prices.

Oil prices tumbled on Thursday despite OPEC+ nearing agreement as the lockdowns ordered across the world sucked life out of the global economy, and traders reckoned that even a combined reduction of 15 million bpd would be too little to stabilise the market.

Markets were closed for the Good Friday holiday in major centres. But on Thursday, Brent oil prices, which hit an 18-year low last month, were trading around $32 (€29) a barrel, half their level at the end of 2019.

Following talks on Thursday, OPEC, Russia and other allies outlined plans to cut output by more than a fifth and said they expected the US and other producers to join in their effort to bolster prices.

“Desire was confirmed for coordination of actions aimed at the stabilization of the global oil trade situation and the mitigation of the negative impact from volatile oil prices on the global economy,” the Kremlin said following the call with other producers.

But the group, known as OPEC+, said a final agreement was dependent on Mexico signing up to the pact after it balked at the production cuts it was asked to make.

“I hope (Mexico) comes to see the benefit of this agreement not only for Mexico but for the whole world. This whole agreement is hinging on Mexico agreeing to it,” Saudi Energy Minister Prince Abdulaziz bin Salman told Reuters by telephone.

During the talks, Mexico proposed reducing its oil output by 100,000 barrels per day (bpd) in the next two months, and would reduce output to 1.681 million bpd from 1.781 million bpd reported in March, Energy Minister Rocio Nahle said in a tweet on Thursday. Mexico was being asked to cut by 400,000 bpd. – Reuters