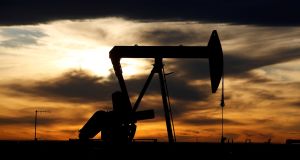 Exxon Mobil posted its first quarterly loss in at least 32 years of Friday and rival Chevron warned of a “very tough” second quarter.

And rival Chevron slashed its capital spending plans by another $2 billion (€1.8 billion) as the coronavirus pandemic guts demand for oil and gas, even as asset sales helped it deliver a year-over-year 38 per cent increase in profits.

Global fuel demand has tumbled by a third on coronavirus-related lockdowns and business shutdowns. Oil giants largely have reported losses on weaker margins and writedowns from an oil glut that has sent prices to historic lows.

All of Exxon’s businesses posted lower profits or wider losses except for chemicals, where low oil and gas prices lifted earnings.

Earnings at Chevron beat Wall Street expectations and were $3.6 billion (€3.2 billion) in the first quarter, up from $2.6 billion (€2.3 billion) during the same period last year and boosted by $1.6 billion (€1.4 billion) in asset sales in the Philippines and Azerbaijan.

The second-largest oil producer in the United States cut its spending budget to $14 billion (€12.7 billion), down from the $20 billion (€18.1 billion) it had planned before the oil price crash. Its 30 per cent total planned spending cut matches that of Exxon Mobil. The cuts are “across the board”, said chief financial officer Pierre Breber.

Oil and gas output rose to 3.24 million barrels per day (bpd), an increase of more than 6 per cent.

Chevron and Exxon had been racing prior to the coronavirus crisis to each reach 1 million barrels per day of production in the Permian basin, but both have slashed spending there.

Chevron has sidelined 10 drilling rigs since early March and Exxon has cut 11 in the field since, according to data from research firm Enverus. – Reuters