Tyrone gold mine has potential to yield hundreds of jobs 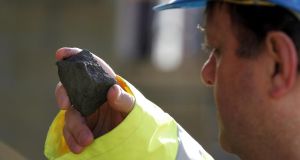 Dalradian Resources, the Canadian and London listed group that wants to develop a gold mine in Tyrone, has secured a funding injection of approximately £51 million which it believes is a “vote of confidence” in Northern Ireland.

Dalradian intends to apply for planning permission to develop a gold mine at Curraghinalt where it says it has identified a deposit of “a lode gold system”.

It believes its gold project has the potential to create more than 350 jobs in the North.

It is one of two Canadian groups who want to dig for gold in Tyrone – the second Galantas Gold Corporation, also listed in Toronto and London, owns a gold mine near Omagh.

Dalradian has confirmed that both Osisko Gold Royalties and Orion Mine Finance are prepared to invest in Dalradian via a non-brokered private placement while Osisko will also exercise 6.25 million warrants.

One of the conditions attached to the new finance injection is that Dalradian must submit its application to obtain planning permission from the North’s Department of Infrastructure by the time the private placement closes on or prior to November 30th.

Dalradian recently wrote to local residents who live near the proposed Curraghinalt gold mine to advise them that it was ready to apply for planning permission. In the letter, it said that it hoped to reassure people who had been worried about the idea of a gold mine in the area where they live.

“Dalradian are keenly aware that our project will co-exist with the agricultural community and the local population in a beautiful part of the world. We want to make sure the project protects the landscape we all care so much about,” the company stated.

Patrick Anderson, Dalradian’s chief executive, said the investment injection by Osisko Gold Royalties and Orion Mine Finance together with other recent developments means the company is now well funded to progress its Tyrone plans.

“This is a strong vote of confidence in both the Curraghinalt Gold Project and in Northern Ireland as an investment destination by two highly respected mining finance groups,” Mr Anderson said.