Dividend paid to State up 87% to €15m, while the group is now close to being debt free 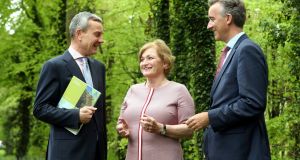 The dividend paid to the State rose 87 per cent to €15 million, while the group is now close to being debt free.

Operating cash flow also increased, doubling to €60 million last year, and it now has a cash yield of 4.6 per cent on a net asset base of €1.3 billion.

Coillte’s recently-appointed chairwoman Bernie Gray said the aggressive reduction in debt levels over several years would give the group “padding” in the event of external threats such as Brexit, and also meant it could invest steadily in future growth opportunities.

“This strong performance by Coillte is the culmination of a transformation which has been taking place in the business over the last number of years,” Ms Gray said. “I’ve been involved with a number of semi-State companies, and any semi-State company would be delighted to stand over these figures.”

She added that The challenge for Coillte now would be to continue this performance.

The company has begun the process of appointing a new chief executive to replace the outgoing Fergal Leamy, who is joining Glen Dimplex as group chief operating officer.

Acting Coillte chief executive Gerry Britchfield, who was previously chief operations officer and chief financial officer, said he believed he was “very well qualified” to do the job on a permanent basis, but that it was a decision for the board.

Mr Britchfield said Coillte’s exclusive talks with the ESB about a wind energy joint venture would likely be concluded by the middle of the year.

The sale to Greencoat Renewables of most of its operating wind farm assets generated a total consideration of €127 million in 2018, which is more than five times the return on original investment. Its strategy now is to develop wind farms rather than operate them over the long term.

As much as half of the turnover of its wood panels manufacturing business is UK-based, which means the company will incur an impact from non-tariff barriers after Brexit.

Mr Britchfield said it has taken out more warehouse space in the UK “as an insurance policy”, and began stockpiling products there ahead of the original March 29th Brexit date.

It would continue this policy until the outcome of the Brexit process becomes clear, but it expects any related turbulence will be temporary for the business. “The UK is a very important market for us, but it is also a big importer of wood. Hard Brexit or soft Brexit, it will still be a big importer of wood.”

Coillte, which employs more than 800 people, manages a forest and land estate of about 44,000 hectares, which is equivalent to approximately 7 per cent of the country’s land.

It said while unusually dry weather conditions in the summer of 2018 led to the outbreak of more than 150 forest fires on its lands, “an excellent response” from staff and emergency services meant the forestry and habitat lost to fire was limited to 600 hectares.

Coillte’s assets include 300 recreation sites and more than 3,000km of marked trails.

Last year it proposed a new flagship project at Avondale Forest Park in Co Wicklow under the theme A Place of Visionaries, the idea being to highlight the history of Irish forestry and the lives of the Parnells, whose family home was Avondale.

The project is now fully funded with full planning consent, and construction of the new forest park will begin this year.

1 Should my mam wait for house prices to drop before buying?
2 Chris Johns: Past is another country when it comes to our post-pandemic future
3 Pilita Clark: Why we’re about to learn if we are really in the A-team
4 Irish whiskey sales near milestone of 12m cases a year
5 ‘I have a talent for justifying purchases’
6 ‘I’m so lucky to be in the Caribbean – a million miles from Derry Girls’
7 Citigroup warns that markets are out of step with reality
8 Military-style planning can help businesses battle Covid-19 survival threat
9 Joint accounts: if one of us dies, can the other access the money?
10 Michael Smurfit: ‘I asked Trump to invite me to the White House for my 80th birthday’
Real news has value SUBSCRIBE