Positive year for Minicon in 2018 as revenue rises above €100m

Acquisitions pay off in 34% growth in products 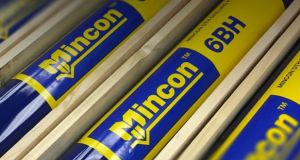 Irish engineering group Mincon said 2018 had been a positive year for the group, with revenue rising 21 per cent and operating profit increasing 16 per cent.

The company attributed the growth in part to a 34 per cent rise in Mincon products, the majority of which was down to acquisitions. The company said 10 per cent of growth was organic. Sales of its own manufactured products broke through the €100 million mark for the first time, with third party sales dropping to €17.3 million.

Third party sales fell due to the acquisition of Driconeq, which meant drill pipe supplies now come from inside the group.

Gross profit margin, excluding the drill pipe sales and rigs, rose to 40 per cent, from 38.9 per cent the previous year.

“We achieved record profitability for the group at €16.4 million of operating profit, a 16 per cent increase, and this translated into profit after tax of €13.3 million before an exceptional gain, or €13.85 million after the exceptional items. The earnings per share increased by 35 per cent to 6.45 cent,” said chief executive Joe Purcell.

“We do not expect acquisitions to add much to profitability in their first year due to acquisition and transition costs, but we expect to improve the gross and net margins in the full year coming. During the year we also consolidated the two factories in Sunne, Sweden, and the management teams, and the two drill pipe businesses in Australia and took the Australian business of Driconeq out of Administration. Driconeq represents good value for the Group, but it has taken some work, which will continue into 2019. Overall, we are happy with the businesses, their teams, the trading and the additions to the product line-up.”

The company said it sold six of 11 rigs it held, giving rise to an exceptional gain of €747,000, on the written down carrying value. It said it intended to realise the €2.3 million tied up in rigs, to reduce raw material inventory by approximately €4 million, and reduce the work in progress and finished goods inventory.

“After some years of very fast growth we will spend the early part of 2019 consolidating the businesses that we have bought, considering the deployment of our balance sheet, and reviewing the value add of products and activities,” Mr Purcell said. “ This is a normal part of Mincon growth and investment, and we build it into our ongoing management review.”