Caveat: From zombies to Enda, Petroceltic row had it all

The company, caught between its dispute with Worldview and the collapse in oil prices, is due in court on Friday 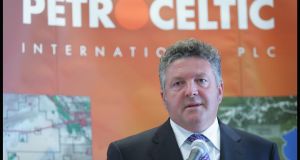 On a Wednesday afternoon in February last year, the Taoiseach, Enda Kenny, was deep in conversation with another man in an almost-empty Shelbourne hotel bar in Dublin.

It wasn’t a scheduled public appearance: Kenny was tucked into the corner immediately inside the back entrance to the bar near the hotel’s side door. It was easy to miss him, which appears to be what he wanted.

The only other group in the bar gathered at one of the high tables in front of the counter, in full sight of everyone passing on St Stephen’s Green. It included Angelo Moskov, the Bulgarian founder of the hedge fund Worldview Capital, and Denis Ischenko, his partner.

They arrived in the Shelbourne following an extraordinary general meeting of the Dublin-headquartered oil and gas company Petroceltic International in the nearby Royal College of Physicians on Kildare Street. Worldview is a 29 per cent dissident shareholder.

At the time, Moskov was at war with Petroceltic’s board over strategy and funding. Management countered by accusing Worldview of trying to gain control of the exploration company’s prime Algerian gas asset on the cheap. The ruckus between the sides had spilled out into the public arena.

Understandably, the group of visitors did not initially notice Kenny in the Shelbourne, much less recognise him. But when it was pointed out to them who he was, they spied an opportunity.

Less than an hour later, Worldview tweeted a photograph of the group posing with an awkward-looking Taoiseach, captioned: “PM listening to Worldview’s concerns.”

The Taoiseach was wearing his anorak in the photo. Contrary to the impression later presented, the group had clearly collared him for a quick snap as he was preparing to leave. Neither side knew each other from Adam.

Their immediate public exploitation of a chance encounter in a bar with a bemused political leader gave an insight into the opportunistic mindset of Moskov and his associates. As one observer this week admiringly mused, they are “street fighters”. Propaganda is important in the art of war.

Petroceltic’s board prevailed over Worldview that day in an egm vote. But in the months to follow, the exploration company underestimated its opponent. Worldview bided its time and wagered Petroceltic would eventually run out of money, which would give it leverage. The explorer’s management team, meanwhile, warned other shareholders that Worldview wanted to eat their lunch.

In the end, they were both right.

The battle for Petroceltic is now entering the final stages. The company, caught between its dispute with Worldview and the collapse in oil prices, is insolvent and due in court today as part of an examinership process aimed at securing a rescue. Worldview, now also the biggest secured debt holder, is well positioned to capitalise.

Petroceltic is a minor company whose Irish shareholder base is so small as to be almost irrelevant. But the battle for control of the Iseq-listed company has been an intriguing, if somewhat niche, corporate row.

Along the way, we encountered zombies, after it emerged Ischenko once acted alongside Brad Pitt in a horror flick. There have been poison-pen blogs, followed by lawsuits against the publishers of those blogs. We have had shareholders weeping at public meetings, anonymous emails and all manner of unsubstantiated allegations.

What we have not encountered, however, is the identity of the financial backers of Worldview. Moskov’s fund, which has never previously been publicly linked to any other assets apart from Petroceltic, has links to Switzerland, the US, London, the old eastern bloc states and the Cayman Islands.

Some observers speculate that it is linked to a handful of high net worth individuals while others say it is simply a traditional hedge fund, drawing investors from the usual well.

A stand-off apparently emerged over the voting rights attached to the senior debt, which is said to have threatened Worldview’s position. The banks wanted a better price. Last week, Worldview off-loaded 32 per cent of the loans to another Cayman Islands fund. The net effect was to box the banks in behind two bigger debt blocs.

Worldview is in a strong position, although it may yet face competition if another bidder approaches the court-appointed examiner, Michael McAteer of Grant Thornton.

Ireland, meanwhile, looks set to lose another member of its dwindling band of scrawny exploration companies. Unless it is bought by an Irish investor – which looks most unlikely – there is no reason for it to remain here. It has no Irish assets, and soon it will have no Irish shareholders or management.

Ireland, to mangle a Kennyism, increasingly looks like the best small country in the world in which to lose an exploration investment.

There appears to be no stopping Smyths Toys in its foray into the UK market, where it is taking on the market leader, Toys R Us. It has just applied for planning permission for another huge superstore, a 15,000sq ft outlet in a retail park in Kent.

The Irish company is owned by the low-profile Smyth brothers – Liam, Thomas, Patrick and Anthony – from Claremorris in Mayo. From a standing start in 2007, they have opened more than 60 stores in Britain in a lightening advance. Smyths also operates six stores in Northern Ireland, as well as 21 in the State.

Smyths is one of Ireland’s biggest international retailing successes, and it is still family-owned. The hard numbers, however, are difficult to ascertain from beneath the group’s unlimited status.

We know that the UK division had profitable sales of £256 million (€316 million) in 2014, when it was growing at almost 40 per cent annually. The pace doesn’t appear to have slowed since. Throw in all the Irish stores, and Smyths must be easily a €500 million per annum business now. Child’s play this is not.

As it puts Toys R Us on the run in the UK, its counterpart’s corresponding foray into the Irish market recently ended with a splat. Brian Donoghue, Smyth’s former chief operating officer, launched Toys R Us in this country last year with a plan for up to 10 stores, but after six months, it was game over. The venture went into receivership.

Smyths, meanwhile, goes from strength to strength. They don’t play about, these Mayo lads.

There was a rather peculiar line in last week’s missive from Communicorp about the decision to close down TXFM, the radio station formerly known as Phantom.

“Communicorp [is] committed to funding [its] share of the redundancy costs,” said Gervaise Slowey, the Communicorp chief executive. We have yet to hear the public commitment of the other investors.

Denis O’Brien’s group has two fellow shareholders in TXFM: Denis Desmond’s Gaiety Investments and Evergreen Ventures, which is linked to the former U2 manager Paul McGuinness.

There are just six jobs being lost, so it isn’t going to break the bank for anyone to properly fund the redundancies. The word is that there has been intense discussions between, in particular, the two Denis camps – O’Brien’s and Desmond’s – about who will cough up what towards footing the bill.

Ireland isn’t simply a destination for the tax-efficient location of exotic financial services products, such as catastrophe bonds and insurance risk. It is also a growing destination for ownership rights of professional footballers.

It emerged this week via a document uploaded on to the Football Leaks website that Atletico Madrid last year sold 30 per cent of the rights for star midfielder Koke to Quality Football Ireland IV.

Its shareholder is Clanwilliam Trust Services, so its ultimate ownership is unclear. This company has been linked in the past, however, to US group Creative Artists Agency and football uber-agent Jorge Mendes.

If, theoretically, a star midfielder like Koke is theoretically one-third a Paddy, perhaps the Boys in Green should try and get him on the plane to France for the Euros.

If Tony Cascarino qualified as Irish, well, then. . .