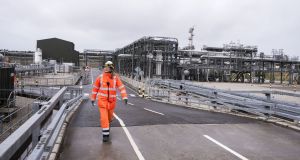 A worker at Shell’s Corrib gas field near Belmullet, Co Mayo, in 2015.

Energy giant Shell has sold its 45 per cent stake in the Corrib gas field to a unit of Canada Pension Plan Investment Board (CPPIB) in a deal worth as little as $947 million (€830 million), resulting in about a billion euro of losses following a decade-and-a-half of heavy investment in the controversial project .

Shell will take an impairment charge of around $350 million against its current balance sheet valuation of the stake in the gas field off Co Mayo when the deal completes in the second quarter of next years. It will also write off $400 million of losses previously booked to reflect euro-dollar currency fluctuations over the lifetime of the stake.

The stake sale includes an initial consideration of $947 million and additional payments of up to $285 million over the next eight years, subject to gas price and production. The transaction is subject to partner and regulatory consents and is expected to be completed in the second quarter of 2018.

“This transaction is part of our strategy to reshape Shell and to deliver a world class investment case,” said Shell’s upstream director, Andy Brown. “It demonstrates the strong momentum behind our three-year $30 billion divestment programme. At the half-way point, we have now announced deals valued at more than $20 billion.”

Natural gas started to flow from the controversial Corrib gas field off Co Mayo at the end of 2015 for the first time since it was discovered almost two decades earlier. Shell acquired a stake in 2002. The project had been dogged by opposition, sometimes turning violent. Between August 2005 and June 2014, the policing of protests and protection of workers at project sites had cost the State €16.4 million, mainly due to the deployment of gardaí.

At peak production, Corrib has the potential to meet up to 60 per cent of Ireland’s gas needs and is expected to supply fuel for up to 20 years.

Shell, whose headquarters are in The Hague, decided in May of last year to sell up to $30 billion of non-core assets around the globe over three years in order to reduce a $70 billion debt pile following a takeover of BG Group in early 2016.

CPPIB’s purchase of the Corrib stake is being structured as a takeover of Shell E&P Ireland Limited, which owns the interest and is the operator of the project.

The Canadian fund has also struck a deal with energy group Vermilion, which currently holds an 18.5 per cent stake, to take over as operator of the field. Vermilion said in a statement on Wednesday that CPPIB will transfer 1.5 percentage points of its 45 per cent holding to Vermilion as part of that aspect of the transaction.

Norway’s Statoil will continue to hold a 36.5 per cent investment in the field.

Sources said on Wednesday that the partners in the project have invested close to $5 billion on the project to date.

Toronto-based CPPIB’s CCP Investment Board Europe fund is the entity buying the Shell stake in the Corrib field. At the end of March, the CPP fund totalled $316.7 billion of assets under management.