It reduced its stake in Providence Resources, led by Tony O’Reilly junior, to 3.4 per cent 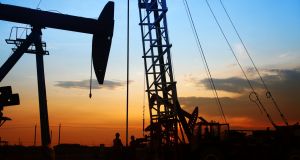 Providence Resources, the oil and gas explorer, has raised $163m from share sales over the past decade to fund the development of its Irish offshore assets

Providence Resources, the oil and gas explorer locked in talks with its main creditor and financial advisers after a court ruling landed it a bill of over $7 million (€6.2 million), has also seen one of its largest investors cut its shareholding in the group.

BlackRock, one of the world’s largest investment firms, reduced its stake in Providence on Tuesday to 3.4 per cent, according a company filing lodged with the stock exchange yesterday.

It previously held 4.7 per cent and is understood to have backed a $28 million share sale by the company last year.

Providence, led by Tony O’Reilly junior, has raised $163 million from share sales over the past decade to fund the development of its Irish offshore assets. Its main project is the Barryroe oil field in the Celtic Sea south of Cork, which was found to be commercially viable in 2012, with an estimated 311 million barrels of recoverable oil.

The BlackRock stake sale occurred before London’s court of appeal ruled on Wednesday that Providence must pay offshore drilling firm Transocean more than $7 million. The dispute originated from services Transocean provided on the Barryroe well in 2011 and 2012.

Providence’s market value was €25.2 million before its shares were suspended in Dublin and London on Wednesday following the court ruling.

Providence has since been in talks with its main creditor, Melody Capital, and financial advisers on how it can meet its obligation to Transocean. Some 20 per cent of the amount must be borne by Lansdowne Oil & Gas, a minority shareholder in the Barryroe project.

Industry sources said suitors for Barryroe – or Providence – could emerge from a group of companies that secured Irish offshore oil and gas licensing options this year. These include Italian giant Eni in partnership with BP in the UK; Texas-based ExxonMobil; Norway’s Statoil; a unit of China National Offshore Oil Corporation; and Woodside of Australia.

While the price of oil, measured by benchmark Brent crude futures in London, has risen to almost $43 a barrel from below $28 in January, it remains well off last year’s highs above $115.