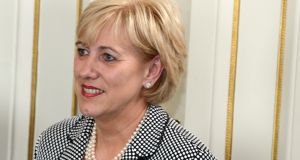 The newly-appointed Minister for Social Protection Heather Humphreys: the new Government has yet to make a decision on how to phase out the benefit.

The Government will avoid a “cliff-edge” when making changes to the special Covid-19 pandemic unemployment payment (PUP), a spokesman has said.

The weekly €350 payments are supporting 439,000 workers who have lost their jobs as a result of the pandemic but at a significant cost to the exchequer.

From this week, however, the €350 payment will only apply to those whose prior earnings were €200 or higher.

As part of the first significant scaling back of the scheme, those who previously earned less than €200 will now get a reduced payment of €203 in line with Jobseekers’ Benefit.

About 25 per cent or 110,000 recipients are expected to be shifted on to this reduced rate.

“In moving onto the next phase of our support for workers incomes we will prioritise transitioning those who are in a position to return to work from the PUP to the wage subsidy,” the spokesman said.

“We will also support those on the PUP who are not in a position to return to work by providing more options for reskilling and availing of different employment opportunities,” he added.

The new Government has yet to make a decision on how to phase out the benefit without leaving some workers high and dry.

However, it has promised to provide clarity on future arrangements as part of the July jobs stimulus package later this month.

When those claiming the PUP (439,000), those on the Live Register (225,600) and those covered by the Government Temporary Wage Subsidy Scheme (405,000) are combined, over a million people are still dependent on the State for their income.

According to Government data, the sectors with the highest number of PUP receipients are accommodation and food service activities (110,700), followed by wholesale and retail trade (57,000) and administrative and support service activities (36,200).

The Government is attempting to wean people off the additional benefit as it gradually reopens the economy. However, it is unclear how many of the recipients will have jobs to go back to once the State fully emerges from lockdown.

The newly-appointed Minister for Social Protection Heather Humphreys said last week said that she had been appointed “at the most challenging time in our State’s history – a time that the State is managing emergency payments for so many people and households in every county”.