Extreme inequality, it turns out, creates a class of people who are alarmingly detached from reality 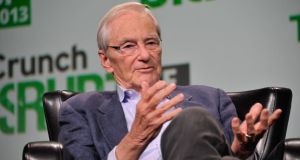 In a letter to the editor of the ‘Wall Street Journal’ Tom Perkins lamented public criticism of the “1 per cent” – and compared such criticism to Nazi attacks on the Jews. Photograph: Getty

It also has big social and human costs. There is, for example, strong evidence that high inequality leads to worse health and higher mortality.

But there’s more. Extreme inequality, it turns out, creates a class of people who are alarmingly detached from reality – and simultaneously gives them great power.

The example many are buzzing about right now is the billionaire investor Tom Perkins, a founding member of the venture capital firm Kleiner Perkins Caufield & Byers.

In a letter to the editor of the Wall Street Journal Perkins lamented public criticism of the “1 per cent” – and compared such criticism to Nazi attacks on the Jews, suggesting that we are on the road to another Kristallnacht.

You may say that this is just one crazy guy and wonder why the Journal would publish such a thing.

But Perkins isn’t that much of an outlier. He isn’t even the first finance titan to compare advocates of progressive taxation to Nazis.

Back in 2010, Stephen Schwarzman, chairman and chief executive of the Blackstone Group, declared that proposals to eliminate tax loopholes for hedge fund and private-equity managers were “like when Hitler invaded Poland in 1939”.

And there are a number of other plutocrats who manage to keep Hitler out of their remarks but who nonetheless hold, and loudly express, political and economic views that combine paranoia and megalomania in equal measure.

Persecuting the rich
I know that sounds strong. But look at all the speeches and opinion pieces by Wall Streeters accusing President Barack Obama – who has never done anything more than say the obvious, that some bankers behaved badly – of demonising and persecuting the rich.

And look at how many of those making these accusations also made the ludicrously self-centred claim that their hurt feelings (as opposed to things like household debt and premature fiscal austerity) were the main thing holding the economy back.

Now, just to be clear, the very rich, and those on Wall Street in particular, are in fact doing worse under Obama than they would have if Mitt Romney had won in 2012.

Between the partial rollback of the Bush tax cuts and the tax hike that partly pays for health reform, tax rates on the 1 per cent have gone more or less back to pre-Reagan levels.

Financial reformers have also won some surprising victories over the past year, and this is bad news for wheeler-dealers whose wealth comes largely from exploiting weak regulation.

So you can make the case that the 1 per cent have lost some important policy battles.

But every group finds itself facing criticism, and ends up on the losing side of policy disputes somewhere along the way; that’s democracy.

The question is what happens next. Normal people take it in their stride; even if they’re angry and bitter over political setbacks they don’t cry persecution, compare their critics to Nazis and insist that the world revolves around their hurt feelings.

But the rich are different from you and me.

More money
And, yes, that’s partly because they have more money and the power that goes with it.

They can and all too often do surround themselves with courtiers who tell them what they want to hear and never, ever, tell them they’re being foolish.

They’re accustomed to being treated with deference, not just by the people they hire but by politicians who want their campaign contributions.

And so they are shocked to discover that money can’t buy everything, can’t insulate them from all adversity.

I also suspect that today’s Masters of the Universe are insecure about the nature of their success.

We’re not talking captains of industry here, men who make stuff. We are, instead, talking about wheeler-dealers, men who push money around and get rich by skimming some off the top as it sloshes by.

They may boast that they are job-creators, the people who make the economy work, but are they really adding value? Many of us doubt it – and so, I suspect, do some of the wealthy themselves, a form of self-doubt that causes them to lash out even more furiously at their critics.

‘Organised money’
Anyway, we’ve been here before. It’s impossible to read screeds like those of Perkins or Schwarzman without thinking of FDR’s famous 1936 Madison Square Garden speech in which he spoke of the hatred he faced from the forces of “organised money,” and declared “I welcome their hatred”.

Obama has not, unfortunately, done nearly as much as FDR to earn the hatred of the undeserving rich. But he has done more than many progressives give him credit for – and like FDR both he and progressives in general should welcome that hatred, because it’s a sign that they’re doing something right.
© 2014 New York Times News Service