Ireland and Britain have been a common labour market for decades. That may change 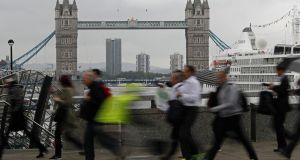 For the past two centuries Irish people have been free to move to Britain to seek employment. Although such migration was more restricted during the Second World War, when work permits were required, even then quite a number of people still emigrated to work in Britain. For most of the period since the Famine this population movement was generally one way: from Ireland to Britain. While some people eventually returned to Ireland, the majority stayed to make a new life in cities such as Manchester and London.

Since the 1960s the ready availability of work in Britain was the key factor driving emigration: when unemployment was much higher in Ireland more people emigrated to find work. However, for much of the past two centuries the headline unemployment rate in Ireland was not a good guide to the difficulty of finding employment. For example, those working on the family farm were not technically unemployed. However, the combination of a greater likelihood of finding employment in Britain, and the higher potential earnings from that employment, drove emigration.

Without the ready option of going to Britain to get work, the likely outcome would have been much lower wages in Ireland, given a large supply of underutilised labour. In a study of the potential labour market effects of Brexit, the ESRI quantified what would happen if emigration to Britain were blocked during a recession: for example, if the numbers on the Irish job market were increased by 60,000 this would cause wages to fall by 4 per cent. Both this study, and a large body of work by the late Prof Brendan Walsh, illustrate the close link between wage rates, unemployment and migration.

Last week the Central Statistics Office published data on wage rates from 1938. It is also possible to link these series back even further to the mid-1920s, giving a pretty good picture dating almost from the foundation of the State.

This integrated labour market meant that wage rates tended to move in tandem in Ireland and Britain. In the 1930s Irish hourly earnings in manufacturing were about 60 per cent of rates in Britain. This ratio remained unchanged for the 1940s and the 1950s. Irish people were prepared to work at home for significantly less than they could earn in Britain but, if the differential was too great, they were prepared to emigrate.

From the end of the 1970s, exchange-rate movements led to quite large temporary divergences between British and Irish wage rates. However, the possibility of migration in both directions continued to anchor the long-term relationship between the returns in each labour market.

From Ireland’s entry to the EU in 1973 up to 2016, Irish hourly wage rates in manufacturing were, on average, slightly higher than in the UK. Over the period, if labour-market circumstances were more favourable in Ireland, emigrants returned, and in bad times, such as the post-2008 crisis, more left.

The costs of migration are also dramatically lower today than in the past. Travel is easier and cheaper, and modern communications permit continued contact with family and friends wherever one is working. This helps explain why expectations of young Irish workers so easily encompass labour-market opportunities in the UK and in other countries.

While immigration into the UK will be restricted after Brexit, it seems very unlikely that it will affect Irish citizens. However, the negative impact of Brexit on the UK economy is likely to see a slower growth in wage rates there in the future. It remains to be seen whether this will affect wage rates in Ireland, as it would have in the past, or whether young Irish workers set their sights on what is available elsewhere in the EU.