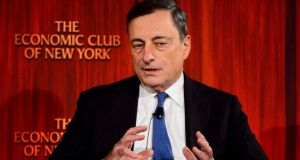 Last week, investors were expecting Mario Draghi to pull a rabbit out of his hat. But could it be that there is no rabbit at all? I believe the extension of the ECB’s quantitative easing programme will have limited impact on the eurozone’s real economy.

Against the ECB’s bazooka lies a solid wall of obstacles. The first is an impaired banking system, muddling through € 1tn of bad loans with balance sheets still three times as large as the eurozone economy. The second problem is a lack of corporate investment, which remains insensitive to lower interest rates. The third is shallow capital markets, a bottleneck against ECB liquidity trickling down to small and medium businesses, responsible for 80 per cent of job creation.

This means monetary stimulus is necessary but not sufficient, as Mr Draghi himself said earlier this year.To be fair, QE has had some success so far. It has lowered the euro and supported exports, both in Germany and the periphery. But currency depreciation is temporary and dependent on the reactions by other central banks. You can win a battle, but winning the currency war is a different story.

If exports aren’t enough, the other transmission channels of QE remain impaired. First, eurozone banks are not lending. Lending volumes to non-financial firms are flat this year after a jump during the first quarter, as banks still hold over € 1tn of bad loans on their balance sheets (10 per cent of GDP).

Restructuring or selling these bad loans is difficult due to inefficient bankruptcy frameworks, while progress to develop alternatives to banks — the Capital Markets Union (CMU) plan — remains slow. Finally, and unlike what Mr Draghi said in last week’s press conference, low interest rates support banks with a one-off gain on government bonds and other securities they hold, but they also erode profitability and capital over time, as recently highlighted by the Bank for International Settlements.

The wealth effect is weak too: higher asset prices reward people who own assets in the first place and the wealthy tend to save more of their gains, reducing the impact of QE on demand. The most important missing piece in the puzzle is corporate investment, down 20 per cent since the crisis.

Why are firms not investing? Because investment decisions aren’t made based on interest rates, as MIT research as well as anecdotal evidence shows. Ireland and Spain are two exceptions where investment has come back thanks to incentives and reforms.

There are three ways to make QE work. One is to boost monetary stimulus with public investment. European governments have little fiscal ammunition for large-scale stimulus. A credible coordinated plan could provide the right signal effect to kickstart private investment, coupled with QE.

Some countries are timidly trying, like France and Italy, yet a coordinated effort remains absent. The EU’s € 315bn Juncker plan for investment is unclear, with a small equity base (€21bn) and 15-times leverage. The US and the UK have partly solved the problem through public-private partnerships, which lower the burden on public finances.

The second option is to deepen Europe’s capital markets so central bank liquidity can flow to Europe’s SMEs. The CMU plan aims at developing this plumbing but implementation is proving complex, given each country’s legal and regulatory frameworks.

The third solution is to attract private investment with a combination of reforms and lower taxes. This has worked in Ireland and Spain. Like for public investment, a successful plan needs to be clear and long-lasting. Where incentives have been complex and frequently changing, such as Italy, they have failed.

With monetary stimulus, eurozone governments have a unique opportunity to revive their economies: never in history have investors been so eager to find returns and so desperate to shift out of safe assets. In the absence of additional measures, the ECB’s actions can become ineffective.

Even worse, QE is not a free lunch. Side effects include keeping alive “zombie” firms that should restructure, reducing returns for savers, encouraging potential asset bubbles and increasing wealth inequality. A policy mix based only on QE is therefore unsustainable, and risks turning into a trap.

The ECB has increased the speed limit. It is now up to governments to open the highway of capital markets and investment.

1 Facebook may pull social media platforms from Europe
2 Aldi empire wracked by family feud
3 Between Covid and Brexit, the economic fallout next year will be profound
4 Volkswagen close to selling its Bugatti supercar brand
5 Mark Paul: Government faces dilemma on which businesses to save
6 Will PTSB be Ulster Bank’s knight in shining armour?
7 Four-day week is a campaign worth watching
8 ‘I just thought it sounded exciting and different’
9 Ireland is quietly allowing private firms to gather and monetise Irish DNA
10 Eason faces a defining chapter in its long history
Real news has value SUBSCRIBE