Who’s afraid of Brexit? Not Irish consumers it seems 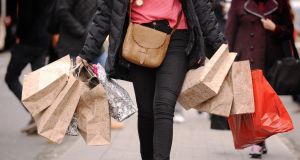 Irish consumer sentiment declined in July in the wake of the UK’s decision to exit the European Union, but the scale of the drop was relatively modest.

Irish consumer sentiment declined in July in the wake of the UK’s decision to exit the European Union, but the scale of the drop was relatively modest.

The KBC Bank Ireland/ESRI consumer sentiment index fell by 3.8 percentage points to 99.6 in July, down from 103.4 in June, but the scale of drop was more muted than that seen in either March or May. Moreover, the July sentiment index still sits comfortably above its long term average. So, the overall survey result for July does not suggest any dramatic fall-out from the results of the UK referendum on EU membership.

Austin Hughes, chief economist with KBC Bank Ireland, said the decline was “not surprising”, but the relatively limited drop in the sentiment index is probably a better outcome than might have been expected.

“There are still so many uncertainties about the Brexit process that Irish consumers don’t seem to regard it as posing a clear or immediate threat to their purchasing power. As a result, last month’s headline figure suggests consumers have become a little more cautious although they remain reasonably positive about the future,” he said, adding that while Brexit means that Irish consumers are less optimistic, they are not “apocalyptic”.

However, there were sharp drops in some components of the index. Consumers’ expectations for the Irish economy, for example, weakened to the lowest level for this element of the survey since November 2013, and there was a notable downgrading of the outlook for jobs to its weakest reading since June 2014.

“The disimprovement in consumer’s expectations this month is being driven mainly by a more negative outlook with respect to future employment prospects as well as falling sentiment with respect to the general economic outlook. The component relating to future unemployment fell by nearly 17 index points this month, most likely as a result of the uncertainty due to Brexit,” said Daniel Foley, research assistant at the ESRI.