What does the ‘Brextension’ mean for the Irish economy?

Brexit cliff-edge avoided – for now – but uncertainty rolls on 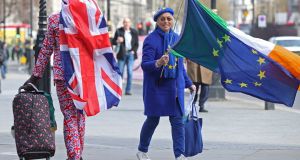 Brexit: The uncertainty just rolls on . . . and on. Photograph: PA Wire

For the Irish economy and businesses, the imminent threat of a no-deal Brexit has been taken off the table. The UK will not crash out without a deal on Friday evening, or some time over the next few weeks. But much uncertainty remains and by October another cliff-edge risk could come into view as the new Halloween deadline approaches. So Brexit and its potential fall-out will remain a vital factor for the economy and Irish businesses for 2019. Irish businesses face yet another deadline and the Government has to plan its finances without knowing how Brexit will pan out. The uncertainty just rolls on . . . and on. Here are the key issues.

A no-deal Brexit would bring a significant and uncertain economic threat as the UK would rupture its trading links with the EU overnight. This isn’t going to happen now in the near future, but could quickly re-emerge as an Autumn risk.