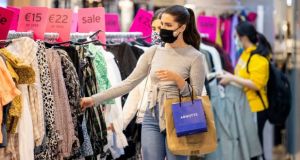 The average weekly earnings of workers in the Republic rose by 3.7 per cent to €797.83 in the third quarter compared to the same time last year, Central Statistics Office (CSO) figures show.

However the rise masks major compositional changes in certain sectors triggered by the coronavirus crisis.

It does not reflect those who lost their jobs as a result of the pandemic.

The weekly earnings of workers in the worst-hit accommodation and food services sector rose by nearly 4 per cent to €391, though their earnings were down when compared to the previous quarter.

Hospitality workers are the lowest paid workers in the State, but the sector has the highest rate of part-time staff, which anchors the average.

Their average earnings are roughly 50 per cent below the national average and a third of IT workers, who had the highest weekly earnings (€1,283) of any sector in the third quarter.

Another hard-hit sector was arts and entertainment, which saw weekly earnings rise by 7.5 per cent to €531 in the third quarter, but this was down nearly 9 per cent on the previous quarter.

The CSO’s latest earnings data show workers in the transportation and storage sector suffered the biggest annual decline in weekly earnings, which fell 6 per cent to €783.

“When considering the change in earnings, it should be noted that there may be a compositional effect due to the significant changes in employment in certain sectors,” the CSO said.

Average hourly earnings increased by 3.9 per cent, rising from €23.53 to €24.44 between the third quarter of last year and this year.