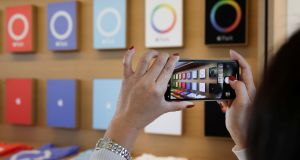 A visitor uses her iPhone X to take a photo at the new Apple Visitor Center in Cupertino. Photograph: Reuters/Elijah Nouvelage

Taoiseach Leo Varadkar has said he expects progress “within weeks” on tech giant Apple paying up to €14 billion into an escrow account.

The money is being held following a ruling by the European Commission last year that the US company owned the sum in back taxes, pending an appeal by both Apple and Ireland.

The Government has told Apple it wants the escrow account established and “funds to be paid into that account without further delay”, Taoiseach Leo Varadkar has said in the Dáil.

Mr Varadkar said he had met Apple executives twice as had Minister for Finance Paschal Donohoe and there had been meetings at official level.

“We have indicated to it [Apple] that we want the escrow account established and funds to be paid into that account without further delay.

“That message is understood and I would anticipate progress on that in the coming weeks.”

Mr Varadkar was answering questions in the Dáil following his recent visit to Silicon Valley in the US where he met senior representatives from a number of giant tech companies.

He was questioned by the Opposition about developments in the Apple tax controversy.

Fianna Fáil leader Micheál Martin said he was “somewhat taken aback that the Taoiseach did not have any detailed tax discussions with any of the company representatives he met and that there was only the briefest discussion with Apple representatives generally” on EU tax policies which would affect US companies.

Mr Martin said it was not just a matter for the EU: “It is clearly a matter for Ireland and is fundamental to our corporate tax strategy in terms of attracting foreign direct investment.”

“My information is that this could be heard as quickly as next year and that the court case could be in 2018.”

Labour finance spokeswoman Joan Burton described Apple as “one of the most aggressive multinationals in terms of its approach to taxation”.