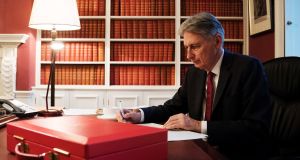 The chances of the chancellor of the exchequer being rewarded with a rousing chorus of “Oh, Ph-i-lip Hammond!” when he delivers his budget in Westminster on Wednesday are slim indeed.

But make no mistake, Hammond intends to target and reward the increasingly unhappy – and politically aware – millennials when he delivers his first budget since the youth vote propelled Labour to its glorious election defeat six months ago.

Hammond will be hoping that a little of the “Jeremania” magic that has inspired adoring millennials to chant the Labour leader’s name at political rallies, football matches and pop festivals around the country might just rub off on him. As he battles to hold on to his job after a series of gaffes and growing pressure from pro-Brexit Tory colleagues, he certainly needs it.

One of the more eye-catching – and relatively cheap – moves to attract younger voters will be the introduction of a digital-only “millennial railcard”, offering cut-price rail travel for those under 30.

Those aged 16-25 are already entitled to a one third reduction in peak fares if they have a £30 railcard, typically saving them up to £200 a year on travel. Hammond will announce on Wednesday that the age range is being extended by another five years, making cheap fares available to some 4.5 million 26-30 year olds.

Even more important than cheap travel for millennials is the chance to buy their own home. Hammond is widely expected to announce a cut in the rate of stamp duty – the tax on property purchases – for first-time buyers.

Currently, properties are exempt from stamp duty up to the first £125,000 of the purchase price – but that would not buy a rabbit hutch in London or many other UK cities.

Details of how the stamp duty break will be applied for first-time buyers remain to be revealed, but those calling for a cut for all house buyers are likely to be disappointed. The tax raised a much-needed £11.8 billion for treasury coffers in the last financial year, money that Hammond desperately needs to hang on to.

Freeing up more land on which homes can be built is another avenue open to the chancellor in pursuit of the government’s pledge to fix the “broken” housing market. He could reclassify some of the less politically sensitive parts of the protected green belt to allow building, a move that has the added attraction of costing the treasury nothing.

Hammond will continue government support for the much-criticised Help-to-Buy scheme, which offers loans and low deposits to first-time buyers purchasing newly built homes. Another £10 billion has been earmarked to extend it until 2021, even though the scheme has been widely blamed for artificially inflating house prices to even more unaffordable levels.

Millennials make up a large proportion of the rented accommodation market and the chancellor has already announced a cap on the deposits paid by renters, and on letting agency fees.

On student loans, the chancellor is expected to raise the income threshold at which they must start being repaid to £25,000. He could also cut interest on the loans by linking them to the consumer price measure of inflation rather than the retail price index, which is higher.

Housing will be central to the budget and there will be much talk too of Britain’s poor record on productivity. The Office for Budget Responsibility (OBR) has already given notice that it will be adjusting its over-optimistic estimates on productivity, putting government finances under further strain and further reducing the chancellor’s room for manoeuvre.

The OBR will also cut its growth forecasts, with the figure for 2017 expected to come down from the 2 per cent predicted at the time of the last budget in March to around 1.5 per cent.

Hammond has had a somewhat shaky run up to the main event. He slipped up badly in the traditional round of pre-budget broadcast interviews at the weekend by claiming on the BBC’s Andrew Marr Show that there are “no unemployed people” in the UK.

The 1.42 million people without jobs were as perplexed as the rest of us at the chancellor’s assertion, made in a clumsy attempt to ease fears over the impact on existing jobs of new technologies such as driverless cars.

The chancellor’s pre-budget nerves are understandable. Given the background of Brexit, weaker growth and the deepening political divide, he has an almost impossible task. He’ll no doubt be happy enough to get to the end of his speech, with or without an “Oh Ph-i-lip” chorus.