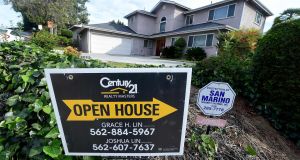 New US single-family home sales rose more than forecast to a four-month high in November, possibly because expectations of higher mortgage rates drew buyers into the market.

Other data on Friday showed consumer sentiment holding at near a 13-year high this month as Americans anticipated that a stronger economy would create more jobs.

The US department of commerce said new home sales increased 5.2 per cent to a seasonally adjusted annual rate of 592,000 units last month.

Economists polled by Reuters had forecast single-family home sales, which account for about 9.5 per cent of overall home sales, rising 2.1 per cent to a 575,000-unit rate last month.

New home sales, which are derived from building permits, are volatile on a month-to-month basis and subject to large revisions. Sales were up 16.5 per cent from a year ago.

Separately, the University of Michigan said its consumer sentiment index edged up to a reading of 98.2 from 98 earlier this month. That was the highest reading since January 2004.

The US dollar pared gains and was trading lower against a basket of currencies after the data. Prices of US Treasuries were trading higher while US stock indexes were mixed.

Mortgage rates have been rising rapidly in the wake of Donald Trump’s victory in the November 8th US presidential election, which economists say could be pulling procrastinators into the market in fear of further increases in borrowing costs.

Mr Trump’s plan to boost infrastructure spending and cut taxes is expected to stoke inflation. A report on Wednesday showed sales of previously owned homes rose to near a 10-year high in November.

Since the election, the interest rate on a fixed 30-year mortgage has increased more than 70 basis points to an average of 4.30 per cent, the highest level since April 2014, according to data from mortgage finance firm Freddie Mac.

Mortgage rates are likely to rise further after the Federal Reserve raised its benchmark overnight interest rate last week by 25 basis points to a range of 0.50 per cent to 0.75 per cent. The US central bank forecast three rate hikes for next year.

Higher borrowing costs come at a time when house price increases are outstripping wage gains, which could make purchases unaffordable for many first-time buyers.