Unemployment rate unchanged in December at 8.8% 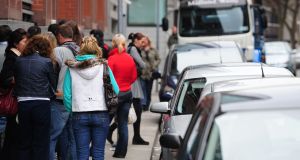 Unemployment remained unchanged on the month at a rate of 8.8 per cent in December 2015, according to new figures from the Central Statistics Office. However the figures showed a significant improvement on an annual basis, down by 1.4 per cent from December 2015, when 219,800 were unemployed and the rate stood at 10.2 per cent.

This is the lowest level recorded since December 2008 (8.6%), and marks a sizeable move from the post-financial crisis peak of 15.2 per cent recorded in January 2012.

However David McNamara, economist with Davy, says that the figures may yet be revised downwards, given the recent trend to do so once the Quarterly National Household Survey is released. As such, he says “a similar revision in Q4 could lead to the December figure being revised down towards 8.5 per cent”.

According to figures published by the CSO on Tuesday, there were 190,600 people unemployed in December 2015, 700 fewer than in November, representing a decrease of 29,200 when compared with December 2014.

The youth unemployment rate (those aged between 15-24 years) fell slightly in December, down to 19.2 per cent from 19.4 per cent in November.

As noted by Alan McQuaid, economist with Merrion Stockbrokers, on an annual basis the improvement in employment continues to be broad based, with an increase in twelve of the fourteen economic sectors. The greatest rate of increase was posted in the construction sector (+13.3% or 15,000).

“The pick-up in this sector is particularly encouraging given that it was the one that suffered the worst job losses in the economic downturn,” he said. Mr McQuaid expects an average jobless rate of 8.5 per cent for 2016.

1 Why the notion that building more houses will cure our housing woes is bogus
2 Life as a Facebook moderator: ‘People are awful. This is what my job has taught me’
3 Irish companies restrict travel over coronavirus fears
4 Suspicions rife as key Brexit trade talks begin in Brussels
5 Bank leaked my loan request to family who tried to rip me off
6 How well paid do you think you are? Here’s how to work it out
7 We have little chance of building enough homes to meet election promises
8 Corona beer firm reeling after 8% slide due to coronavirus
9 Coronavirus rocks financial world as hopes for containment fade
10 ‘The only time apartments were viable was in . . . Ballsbridge, Killiney and Dalkey’
Real news has value SUBSCRIBE