President believes raising of rates is choking off economic boom 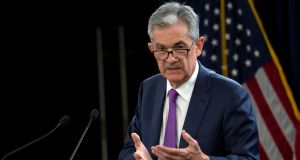 Jay Powell is to address Wall Street bankers on Wednesday amid an intensifying White House campaign to undermine the Federal Reserve chairman’s rate increase plans, an unorthodox offensive led by a sitting president who believes tightening monetary policy is choking off an economic boom.

Donald Trump on Tuesday escalated his criticisms by telling the Washington Post he believed the Fed, which next month is expected to lift rates for a fourth time this year, “is way off base with what they’re doing”.

Mr Trump added: “So far, I’m not even a little bit happy with my selection of Jay.”

But there are signs that the Trump administration has been moving behind closed doors, as well. Steven Mnuchin, the US Treasury secretary, asked several major bond dealers whether they would prefer the central bank to tighten monetary policy through raising short-term interest rates or shrinking its balance sheet.

Bond traders who attended the October meeting of a committee that advises the Treasury on selling debt, which was first reported by Bloomberg, were surprised at Mr Mnuchin’s question given monetary policy is the remit of the Fed, not the Treasury, according to a person familiar with the matter.

Mr Powell has shown no sign of changing tack despite the White House criticisms, which have increased as the US stock market has stumbled.

A combination of rising bond yields, concern that corporate earnings growth has peaked and the weaker economic picture outside the US sent the S&P 500 in October to its worst monthly loss since 2011. After climbing 20 per cent in 2017, the S&P 500 is barely up this year and has fallen almost 9 per cent from its last record high in September.

Recently released minutes of the Fed’s September meeting showed no signs any monetary policymaker was looking to slow the pace of rate increases - indeed, some advocated pushing faster and higher rather than backing off because of widespread signs the economy was accelerating strongly.

Markets also seem to have ignored Mr Trump’s criticisms. Two-year Treasury bonds, widely seen as the US government debt most sensitive to changes in Fed rate policy, were only slightly higher in Wednesday morning trading with yields at 2.84 per cent.

The speech from Mr Powell, who was chosen to succeed Janet Yellen by Mr Trump in February, had already been keenly anticipated by investors who are eager for clues as to whether the volatility in the stock market, signs of stress in corporate bonds and flagging economic momentum in China and Europe might prompt the Fed to slow its pace of rate rises.

The chance of the Fed raising rates next month is almost 80 per cent, according to probabilities derived from interest rate futures, but confidence that officials will add another increase at their March meeting has fallen in recent weeks.

The Fed chief has so far indicated he remains sanguine over the potential risks to a US economy that was given fresh momentum thanks to the tax cuts Mr Trump promised in his election campaign and that were passed by Congress late last year.

Although Mr Trump’s strident criticism of Fed policy is unusual, investors have not been alarmed by it and do not see it as something that will influence the central bank’s rate setters.

“The market is convinced that the seeming encroachment on the Fed’s independence will not impact policy,” said Marc Chandler, chief market strategist at Bannockburn Global Forex. “Powell is expected to offer a balanced view of the US economy” in his speech on financial stability, which is scheduled at midday on Wednesday at the Economic Club of New York.

While Mr Trump’s rebuke of Fed policy adds to the challenging backdrop for the central bank, strategists say Mr Powell’s speech will be of significance if the Fed chief departs from his recent script and suggests that headwinds for the US economy are growing.

“We still see reason to highlight the risk of slowing growth in the US that prompts increased speculation of a more cautious approach to monetary tightening by the Fed next year,” said Derek Halpenny, European head of Global Market Research at MUFG.