Report highlights ‘lack of collective will’ to tackle issues 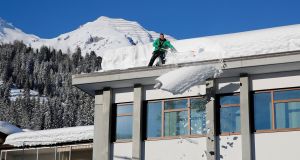 Preparing for the World Economic Forum in Davos, Switzerland, which starts on Tuesday

Rising economic and trade tensions between the world’s major powers top the list of risks facing the globe, according to a report published ahead of the annual gathering of international political and business leaders, including Taoiseach Leo Varadkar, at the World Economic Forum (WEF) in Davos next week.

The 14th annual WEF Global Risks Report, based on a survey of about 1,000 respondents, said fraught international relations will likely make it more difficult to address global challenges – from protecting the environment to responding to ethical challenges of the so-called fourth industrial revolution, or fusion of the digital and physical worlds.

“Global risks are intensifying, but the collective will to tackle them appears to be lacking,” said the report, of which Irish economist Aengus Collins was the lead author. “Instead divisions are hardening. The world’s move into a new phase of state-centred politics, noted in last year’s Global Risks Report, continued throughout 2018.”

Mr Varadkar, Tánaiste Simon Coveney and Minister for Finance Paschal Donohoe are set to join about 3,000 other political, business and academic figures, as well as a smattering of celebrities, next week for the 49th’s WEF in the Swiss Alpine town.

While US president Donald Trump recently cancelled plans to attend the forum for a second year in a row, his treasury secretary, Steven Mnuchin, will lead a delegation from Washington.

The latest Global Risks Report said that 90 per cent of respondents expected further economic confrontations between major governments this year, and almost a similar level predicted an “erosion of multilateral trading rules and agreements”.

The most high-profile stand-off is between the US and China. While both countries moved in early December to call a 90-day truce on their trade war, negotiations between their respective officials in Beijing last week delivered little or no progress on key issues.

Meanwhile, environment-related risks dominated the Global Risks Perception Survey for the third year in a row, accounting for three of the top five risks, according to the report.

“The year 2018 was another one of storms, fires and floods. Of all risks it is in relation to the environment that the world is most clearly sleepwalking into catastrophe,” it said.

The UN Intergovernmental Panel on Climate Change warned last October that there were only 12 years left to keep global warming to a maximum of 1.5 degrees and avert dangerous climate change.

1 Tobacco makers still trying to make a mint from Irish menthol market
2 Ryanair expects air fares to fall when flights take off again
3 ‘I’m so lucky to be in the Caribbean – a million miles from Derry Girls’
4 Household savings soar as consumers stop spending
5 Michael Smurfit: ‘I asked Trump to invite me to the White House for my 80th birthday’
6 Joint accounts: if one of us dies, can the other access the money?
7 Ireland stands to benefit in a big way from investing in public transport
8 ‘The recovery needs to be a full-scale economic renewal’
9 Pepsi to make €338m from disposal of Irish company
10 ‘Never mind GDP; the most fundamental job of any leader is to keep his people alive’
Real news has value SUBSCRIBE