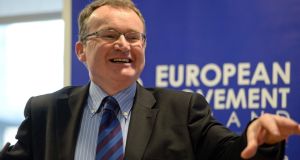 Jim Power noted there was now an array of risks to the Irish economic outlook including Brexit; the policies of US president-elect Donald Trump. Photograph: Eric Luke

The Central Bank’s relaxation of mortgage lending rules and the Government’s planned intervention to assist first-time buyers are “not prudent” and will only generate further house price inflation, Friends First economist Jim Power has warned.

He said the current housing issues could have been better addressed by supply side measures such as reducing VAT in the construction sector; cutting development levies or speeding up planning.

In his latest economic outlook for Friends First, Mr Power said while the Irish economy continues to perform strongly there has been some easing in activity since the beginning of the summer with a softening in retail sales, car sales, exports to the UK and tax revenues.

He noted there was now an array of risks to the Irish economic outlook including Brexit; the policies of US president-elect Donald Trump; weak domestic political leadership and growing wage pressures in the public sector.

“Ireland cannot allow the cost competitiveness of the economy and the fiscal situation be undermined at a time when the recovery is facing immense challenges, not least from Brexit,” he said.

“The global rejection of conventional politics is becoming a bigger and bigger threat to the global economy and political stability,” Mr Power said.

In his report, he forecasts gross domestic product (GDP) will expand by 4.2 per cent this year while gross national product (GNP), which excludes the profit flows of multinationals, will grow by 7.5 per cent.

He said the opportunity presented by Brexit is threatened by housing, public services and the onerous personal tax burden.

“The outlook for the Irish economy is shaping up to be positive for 2017 with all indicators suggesting that economic activity will continue expanding at a reasonable pace,” he said.

“However, we have to acknowledge the immense uncertainty given the range of external factors in operation. The global issues of Brexit and the election of Trump who takes the reins in January are open to many interpretations and only time will tell the actual nature of their impact,” Mr Power said.