Opinion: It could be a good thing if public spending spreads the wealth around 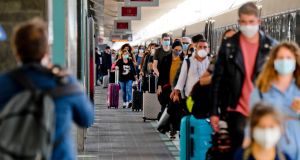 Commuters arrive at the Naples Central Station, after the reopening of Italian regional borders amid an easing of restrictions during Phase 2 of the coronavirus emergency. Photograph: EPA

Governments of all political stripes are spending massive sums to overcome the twin challenges of the Covid-19 pandemic – the virus itself, and the recession it’s leaving in its wake – and rightly so. Some $9 trillion (€8 trillion) in emergency public spending has been rolled out so far, while global borrowing via bonds and loans hit a record high of $2.6 trillion in April. Financial markets have taken this broadly in their stride.

Eventually, though, the question of who will ultimately foot the bill will need to be answered – particularly outside the US, which is relatively protected by the dollar’s global clout. Some assume a future economic rebound will be strong enough to comfortably repay debts over time while central banks keep rates low. But this is a hope, not a guarantee. The risk of lower growth and higher rates is real, necessitating all sorts of painful budget choices, as economist Willem Buiter wrote last month.

Taxation is bound to be one of those choices. Everybody knows that raising taxes in a recession can produce an entirely unhelpful outcome by further hurting demand, as seen in countries that pursued austerity. But governments clearly reckon they can get away with taxes that target specific sectors, companies or people, especially those that are seen as having come out of this crisis relatively well-off.

Hence the plans by several Latin American countries to raise taxes on high-income earners, and Indonesia’s move to raise VAT on digital platforms – because, in the words of its finance minister, “their sales have soared amid the Covid-19 outbreak.”

It’s not just the developing world: The European Union is mulling a series of taxes, to be raised directly by the commission in Brussels, to help fund the pandemic recovery in the 27-nation bloc. They include a tax on high-carbon-emission imports, a tax on digital firms and a tax on 70,000 large multinational companies that access the EU’s single market and its 450 million consumers.

These efforts should be taken seriously. Not all the European proposals will get approval, as the EU’s 27 member states (especially the Republic) are protective of their tax powers, but if done right they can have benefits. Efforts to introduce a digital tax aim to restore fairness to a corporate tax system that has seen the likes of Apple and Alphabet’s Google get away with paying very little. “Don’t try to be too smart,” internal market commissioner Thierry Breton told Facebook’s Mark Zuckerberg recently. “Pay taxes where you have to pay taxes.”

A carbon border tax would combine the EU’s clout as a trading zone with its Green Deal ambitions. And while a levy on big EU firms might seem like a job killer, it would go towards funding a €750 billion recovery plan that pours cash back into the bloc. There’s a clear pro-growth side to these tax proposals, says Axa chief economist Gilles Moec.

The risk, however, is that in shifting more of the burden of recovery funding onto foreign firms and trading partners – the top two being the US and China – the EU could end up creating new geopolitical and trade headaches.

US president Donald Trump’s administration is starting investigations into digital taxes from the EU to India that could lead to retaliatory export tariffs. Targeted taxes don’t raise as much money as broad-brush hikes, and if other governments start rolling out tit-for-tat measures, their benefits will be smothered.

But it’s worth trying, especially if we want to create a better world beyond the coronavirus crisis. It could be a good thing if tax systems become more progressive and if public spending spreads the wealth around. If the future is anything like the society that emerged from the rubble of post-war Europe, there will be a focus on investment, big projects, and rebuilding. There are fewer constraints on government finances right now, as Goodbody Stockbrokers chief economist Dermot O’Leary points out: bond vigilantes have scattered, and austerity advocates are quiet.

The smoke signals of higher taxes are going to get more visible as governments get settled into their new role as drivers of the world economy. But there’s no free lunch, either. Along with politically popular taxes, expect stealthier ones that aren’t, financial repression and other tactics to shake more money out of the private sector. And a Trump administration ready to hit back. – Bloomberg