Trade war between US and China moves a step closer 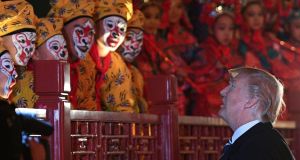 US president Donald Trump during a visit to Beijing in 2017: in China the trade war is read as a flagrant example of the US trying stop China from taking its rightful place as the world’s biggest economy. Photograph: Jim Watson/AFP/Getty Images

This week we will learn of the terms of engagement in a looming trade war between the world’s two mightiest economies.

Washington will reveal the details of €40-€50 billion worth of tariffs on Chinese imports following an investigation into Beijing’s intellectual property practices, as well as what Washington sees as forced technology transfer policies.

In the tit-for-tat build-up, China introduced tariffs of up to 25 per cent on 128 US imports, including frozen pork and fruit and nuts, in retaliation for earlier US duties on imports of aluminium and steel.

China’s trade deficit with the US is $375 billion (€304 billion) and US firms regularly complain that Beijing steals or pressures foreign companies to hand over technology and does not allow level playing fields when it comes to doing business.

In China, the trade war is read as a largely political battle, a flagrant example of the US trying stop China from taking its rightful place as the world’s biggest economy. Online commentators accuse the Americans of “shameless” behaviour.

In the nationalist Global Times tabloid, a cartoon this week was of a panda playing ping-pong with US president Donald Trump, firing back balls labelled “fruits” and “pork”, and the message has been that China’s response has been to give the US “a dose of its own medicine”.

“China does not want a trade war, but it will not retreat should one emerge,” the paper thundered.

Despite the rhetoric, China’s response has been pretty restrained so far. Beijing is a canny negotiator on trade matters, and while happy to make noise in the opening salvoes of a trade war, it is slow to use its armoury of weapons.

The move to boost the domestic economy in recent years has made it far less susceptible to pressure on exports, and it can still unroll damaging tariffs that will hit key US exports such as aircraft, cars and – biggest export of all to China – soybeans.

No doubt developments will be closely watched in Ireland. During his recent visit to Beijing, Tánaiste Simon Coveney was told by foreign minister Wang Yi that trade expansion between Ireland and China was a bigger percentage growth than with any other country last year at 37 per cent.

The US trade deficit with European Union nations is about €92 billion, about which the US is also unhappy, but Ireland is one of the few countries in Europe to operate a trade surplus with China.