Chancellor warns output will fall by 11% this year 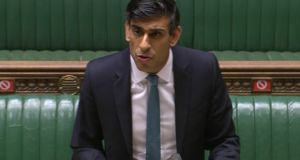 Chancellor of the exchequer Rishi Sunak: ‘Our health emergency is not yet over, and our economic emergency has only just begun.’ Photograph: PA

Britain faces an economic emergency with output falling by 11 per cent this year and 2.6 million people expected to be out of work by next Spring, chancellor of the exchequer Rishi Sunak has warned MPs at Westminster. The chancellor was unveiling a spending review that includes billions of pounds to help the unemployed back into work, improving infrastructure and funding the National Health Service (NHS) he said the cost of the British government’s response to coronavirus was set to reach £280 billion (€314 billion).

“Our health emergency is not yet over, and our economic emergency has only just begun. So our immediate priority is to protect people’s lives and livelihoods,” he said.

“But today’s spending review also delivers stronger public services, paying for new schools, better schools and safer streets, and it delivers a once in a generation investment in infrastructure, creating jobs, growing the economy and increasing pride in the places we call home.”

In forecasts published alongside the spending review, the Office for Budget Responsibility (OBR), an independent fiscal watchdog, predicts the biggest annual fall in Gross Domestic Product (GDP) for more than 300 years. Its central forecast, which assumes that Britain and the European Union will agree a post-Brexit deal by the end of the year, predicts that the economy will contract by 11.3 per cent this year.

The OBR expects the economy to recover as the coronavirus health crisis recedes, growing by 5.5 per cent next year, by 6.6 per cent in 2022 and by 2.3 per cent, 1.7 per cent and 1.8 per cent in the following years. It predicts that the unemployment rate will peak at 7.5 per cent in the second quarter of 2021, falling in each year after that until it reaches 4.4 per cent in 2024.

If there is no deal with the EU, the economic outlook worsens, with unemployment expected to rise to 8.3 per cent next year and a 2 per cent negative impact on GDP. And the OBR warns that the sectors which have been least affected by coronavirus will be those most seriously impacted by a no-deal Brexit.

“Businesses involved in the provision of non-tradable, face-to-face services such as hospitality, transport, and entertainment have been hardest hit by coronavirus as they are directly affected by public health restrictions and face difficulties in implementing social distancing. By contrast, firms in the manufacturing, financial services, and mining and quarrying sectors have been spared the worst economic consequences of the pandemic thanks to their ability to continue to operate while adhering to social distancing rules. However, it is these latter, trade- intensive sectors that are most exposed to the loss of unfettered access to the EU market,” its report says.

Mr Sunak faced an immediate backlash from Conservative backbenchers when he announced that Britain would cut its international aid budget from 0.7 per cent of GDP to 0.5 per cent. The move, which will save around £4 billion a year, is in breach of a commitment in last December’s manifesto to maintain the current level of aid spending.