EU recovery fund in balance amid calls for consequences for Hungary 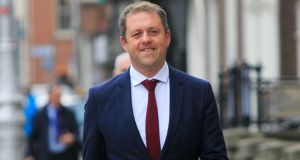 ‘We need to make sure that jobs and investment are protected,’ said Minister of State for European Affairs Thomas Byrne. Photograph: Gareth Chaney/Collins

The blocking of the European Union’s €1.8 trillion budget and Covid-19 pandemic fund by Hungary and Poland has led to warnings of a crisis in the bloc and calls for the expulsion of Budapest’s governing party from the EU’s biggest political group.

The right-wing nationalist Polish and Hungarian governments used their vetoes to bar EU member states from finalising the rescue fund and the EU’s 2021-2027 budget due that was to come into force in January, in retaliation for a new rule requiring states to observe the rule of law to access funds.

Governments from across the continent warned that the development risked worsening the economic impact of the pandemic by delaying the issuance of funds to the hardest-hit states, and urged the two blocking states to reconsider.

“The economic situation is fragile due to the coronavirus pandemic . . . our citizens need that economic certainty in a time of uncertainty,” Minister of State for European Affairs Thomas Byrne told a video conference with the 27 member states.

“I’m asking colleagues to look very carefully at the consequences,” he added. “Our citizens need this, our economies need this, we need to make sure that jobs and investment are protected.”

France’s European affairs minister Clément Beaune warned that if the package was not agreed, “the health crisis that we are experiencing today will be aggravated by an economic crisis and a political crisis”.

Hungary and Poland are set to receive substantial sums in budget and recovery fund money under the package, but fear they could be barred from accessing it under the new conditionality rule, which could hold back money from governments involved in democratic backsliding.

Both countries are already under a formal EU investigation for accusations their governments have interfered with the independence of the judicial system, media, and non-governmental organisations.

“For years, the dogs on the street have known that Fidesz, the EPP’s member party in Hungary, were a party of bigots and ultra-nationalists. Fine Gael knows this. The EPP knows this. Yet they have done nothing other than merely suspend them,” Mr Kelleher said.

“I would never make the leap and accuse Fine Gael of believing in the things Fidesz do. However, sometimes acquiescing, and facilitating their continued involvement at the top table of European politics, can be just as bad.”

Fine Gael leader in the European Parliament Seán Kelly said the EPP will have to “look urgently” at the issue of expulsion. “If you respect rule of law there is nothing to fear in having rule of law conditionality attached to EU budgets and funding,” Mr Kelly said.

EU leaders will attempt to forge a compromise on the issue in a video conference on Thursday, but the issue is expected to require an in-person summit in Brussels next month to resolve.