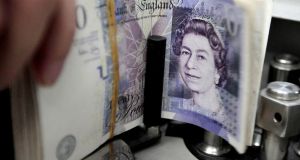 The pound dropped 0.4 per cent against the euro to 89.32 pence, and fell to a low of $1.3010 against the dollar, its weakest since September 5th. File photograph: Sukree Sukplang/Reuters

Sterling slid heavily against the euro and the dollar on Wednesday after data showed British inflation failed to rise as expected, a day after Brexit-linked political turmoil had sent the currency hurtling lower.

Annual consumer price inflation held steady in June at 2.4 per cent – the bottom end of forecasts in a poll of economists who had expected to see the first increase this year, to 2.6 per cent. Market expectations for a 25 basis point August interest rate rise by the Bank of England fell back to 69 per cent from close to 80 per cent earlier this week.

The pound was already down before the inflation data and worries about British prime minister Theresa May’s ability to push through her Brexit plans after she only narrowly won a crucial parliamentary vote on Tuesday.

Ms May threatened rebel MPs in her Conservative Party with a general election this summer if they defeated her Brexit plans on customs. Against the euro the pound dropped 0.4 per cent to 89.32 pence, and fell to a low of $1.3010 against the dollar, its weakest since September 5th.

“BoE hike expectations will be pared back no doubt for August, especially given recent political uncertainty. Even with a net vote in favour of a hike, we are likely to see a one and done,” Neil Jones, head of FX hedge fund sales at Mizuho Bank said. Britain’s FTSE extended gains to touch a session high after the data. British government bond futures surged by more than 30 ticks after the data and 10-year gilt yields dropped to their lowest since May 31st.

Ms May survived a crucial parliamentary vote on part of her Brexit proposals on Tuesday, but the vote was the latest in which her authority has been challenged and deep divisions within her own government laid bare. She also saw off an attempt by pro-European Union rebels in her own party to require the government to try to negotiate a customs union arrangement with the EU if, by January 21st, 2019, it had failed to negotiate a frictionless free trade deal with the bloc. Markets and many investors want to see Britain retain close trade ties with the EU, possibly through a customs union, after Britain leaves the bloc in March 2019.

The political turmoil caused the pound to suffer its biggest one-day fall in more than two months. A dollar rally following bullish comments from Federal Reserve chairman Jerome Powell also hurt sterling. “It is becoming more obvious by the day that May is finding it increasingly difficult to gain a majority in parliament for her Brexit plan,” Commerzbank analysts said.

Sterling tumbled two cents against the dollar in the space of hours on Wednesday before the parliamentary vote. – Reuters