EU and Japan sign one of history’s largest trade deals

Move seen as counterweight to offset US protectionism under Donald Trump 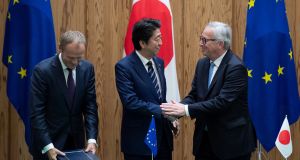 Japan and the European Union have officially agreed one of history’s largest trade deals, in what will be seen as a calculated snub of Donald Trump’s protectionist policies.

Political leaders in Tokyo on Tuesday heralded the Economic Partnership Agreement, which will bind together two trading powerhouses accounting for 30 per cent of the world’s economy.

The deal, which is five years in the making, will virtually scrap import duties on Japanese goods into the EU, including machinery parts, tea and fish, when it takes effect by late 2019. A 10 per cent tariff on passenger cars will be abolished over seven years.

Europe successfully nudged Japan to face down its powerful farm lobby by cutting tariffs on imported wine, pork, cheese, chocolate and other food products. Japan will eliminate tariffs of more than €1 billion on about 94 per cent of European imports into the country before phasing them out almost entirely, said the European Commission.

Donald Tusk, president of the European Council, said the deal was a vote of confidence in the global order of rules-based free trade. “At a time when some are questioning this order, we are sending a clear message that we stand against protectionism.”

In a joint statement, the leaders pledged to defend the world’s trading status quo. “In giving full effect to this agreement, Japan and the EU are sending a powerful message to promote free, fair and rules-based trade, and against protectionism,” it said.

Estimates produced by Japan’s government said the agreement could add about 290,000 jobs and five trillion yen to the Japanese economy – or about 1 per cent of GDP.

President Shinzo Abe called it “historic” at a time when protectionist sentiment is “spreading around the world”. He said it would help offset the impact of Japan’s shrinking domestic market.

Among the industries celebrating the official signing of the agreement is Irish whiskey, which has long played second fiddle to its better-known, more powerful Scottish rivals.

Sales of Irish whiskey were up nearly 16 per cent in Japan last year, according to the Irish Whiskey Association, and many companies believe there is plenty more room to grow.

William Lavelle, head of the IWA, said: “We see Japan as being a key growth market for Irish whiskey in future years.”

Japan and the EU have been left stunned by US plans for new tariffs on steel and aluminium products and threats to hike tariffs on Japanese cars and auto parts – a key export earner. In May it was reported that Japan was considering retaliatory tariffs of $409 million on US exports.

Speaking in China on Monday, Tusk said it was a “common duty” of Europe and China, the US and Russia, not to destroy the global order but to improve it.

European Commission president Jean-Claude Juncker told reporters on Tuesday that the Japan-EU deal “a landmark moment for global trade” and said it would set the standard for others. “As far as we are concerned, there is no protection in protectionism. We want to rewrite the rule book together, not destroy it.”

The deal must be ratified by both parliaments before it comes into affect. Greenpeace International senior political strategist Shira Stanton said: “The trade deal signed today, and others like it, smack of corporate protectionism at the expense of democracy, social rights, and environmental and climate protection. The EU and Japanese parliaments should reject it. These kinds of trade agreements are not an appropriate response to protectionism. Only enhanced international co-operation that prioritises people and the planet can help solve the pressing problems of our time, like climate change, inequality and conflict.”