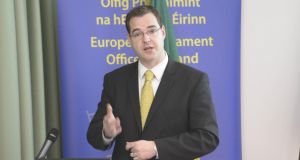 Economist Micheál Collins said Ireland had “effectively written the textbook on how not to do property supports via the tax system”. Photograph: Brenda Fitzsimons

The State loses approximately €21.4 billion in revenue each year in what are known as “tax expenditures”.

These include the wide range of reliefs and reductions allowable to individuals and families under income tax and other taxes, but also the generous tax shelters allowed to firms and foreign executives domiciled here.

University College Dublin economist Micheál Collins revealed the high level of revenue forgone through these reliefs and reductions at a meeting of the Budgetary Oversight Committee on Tuesday.

“The most recent list of tax expenditures from the Revenue Commissioners lists a total of 120 tax-relieving measures,” Dr Collins said.

“Of these, I would classify approximately 106 measures as discretionary and the total cost of these measures in revenue forgone is €21.4 billion per annum,” he said.

In many cases measures such as tax credits for individuals and PAYE workers were “regarded as worthwhile” and were viewed as part of the tax base, he said, and did not need to be reviewed.

While others were “discretionary” they also had long-standing policy support. These included tax relief on child-benefit payments and tax relief on nursing-home expenses.

However, Dr Collins said there were other discretionary measures, including mortgage interest relief and income tax reduction for high-income foreign executives, that were more controversial and may need to be assessed to evaluate their effectiveness and whether they should contain “sunset clauses”.

Referring to the various measures deployed by previous Irish governments to promote property-related activity, many of which were implicated in the financial crash 10 years ago, Dr Collins said Ireland had “effectively written the textbook on how not to do property supports via the tax system”.

Even a recent capital gains tax (CGT) exemption for investors who held on to to land for seven years, which has now been phased out, was linked to land hoarding in Dublin while at the same time chronic housing shortages were inflating prices.

People Before Profit TDs Richard Boyd Barrett said costs in certain areas were being inflated for the purpose of drawing down tax reliefs without much Revenue scrutiny.

Dr Collins acknowledged that in certain areas there was an ethos of not wanting to place an administrative burden on the recipients of certain reliefs, which meant collecting “as little information as possible” and this needed to be reviewed.

“Overall, given the importance of that revenue to support the running of the State, and the redistribution of resources, it is remarkable how little attention the policy-making system gives to the nature and stability of the overall taxation system,” Dr Collins said. Within that, tax expenditure represents a large part of the system, he said.

He recommended the committee request that the Department of Finance finalise a list of tax expenditure measures which are not part of the baseline or “technical functioning of the tax system” and and that they provide a report with the cost of these measures, in revenue forgone terms, to the committee each year.

Dr Collins will soon publish a report on the costs, distribution and policy options around the large amount of recurring annual tax expenditure granted to support private pension savings.

1 What to consider if older person or loved one needs care at home
2 ‘Essential’ retailers risk a firestorm if they exploit the closure of the ‘non-essential’
3 Fair deal? Family at odds with hospital and each other not so sure
4 Pension auto-enrolment looks unlikely in 2022
5 Streaming services set for Christmas battle after drama-filled year
6 Ryanair and Eir the worst for customer service during Covid crisis
7 Covid-19 has shown that much of ‘normal’ life should have been binned years ago
8 INM investigation, mandatory pension stalls again and streaming wars
9 Cabinet to agree on implementing EU travel plan
10 INM inspectors write to former directors in ‘inside information’ inquiry
Real news has value SUBSCRIBE