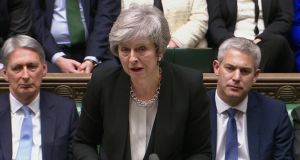 UK prime minister Theresa May addresses MPs following the results of voting on amendments put forward by MPs over the UK government’s Brexit deal, in the House of Commons, London. Photograph: PA Wire

Sterling rose on Wednesday after declines triggered by the UK parliament’s rejection of amendments to delay Brexit, as investors bet the government would still avoid exiting the European Union without an agreed trade deal in place. The pound fell 0.7 per cent on Tuesday after MPs voted to demand prime minister Theresa May renegotiate the terms of Brexit but rejected an amendment that would have postponed Britain’s scheduled March 29th departure.

However, an amendment that stipulated averting a no-deal Brexit did pass, and analysts said risks of a chaotic Brexit had risen only slightly. Goldman Sachs, for example, put the chances at 15 per cent compared with an earlier 10 per cent forecast. Earlier, sterling had risen 0.3 per cent to $1.3111. It had fallen by about a cent on Tuesday after the vote. Against the euro, the pound rose around 0.15 per cent to 87.4 pence after a source said on Wednesday that British opposition Labour leader Jeremy Corbyn will tell Mrs May to take a hard no-deal Brexit off the table. T

The currency had gained before the vote on expectations parliament would approve a deal on time or would extend the Article 50 deadline. Analysts said not much had changed on that front. “The market is still giving a very low probability to a no-deal,” said Sarah Hewin, chief Europe economist at Standard Chartered, which still sees chances of hard Brexit at 20 per cent. “The sense I get is people feel that is a negligible prospect. “But chances of an extension to Article 50 are rising. That probability is looking more likely than not with each day that goes by.”

Analysts at BNP Paribas agreed, advising clients to stay long sterling and seeing a Brexit delay as “inevitable.” The renewed uncertainty caused money markets to reduce expectations the Bank of England would raise interest rates in 2019. The probability is now only a 52 per cent, compared with 64 per cent on Tuesday before the vote. “The market is taking the view that as long as Brexit uncertainty persists it’s going to be difficult for the BoE to raise rates. As we are now in the realm of extending Article 50, it means uncertainty is also extended and that’s the rationale behind the pricing,” Ms Hewin said. - Reuters