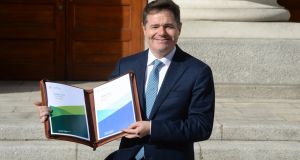 The Government should consider diverting €1.5 billion of “excess” funds in the Ireland Strategic Investment Fund (ISIF) to developing the State’s infrastructure, according to a Department of Finance report prepared in advance of Budget 2019.

Minister for Finance Paschal Donohoe has followed up on another recommendation in the report, that a further €1.5 billion of ISIF money be freed up and put into the planned rainy-day fund.

The Minister confirmed in his budget speech on Tuesday afternoon that the new fund would initially be capitalised with €1.5 billion from ISIF, with the exchequer committing to providing €500 million annually from next year.

The Minister said the exchequer’s contribution would be boosted by “transient” higher-than-expected corporate tax receipts.

ISIF was set up in 2011 as a successor to the National Pensions Reserve Fund, and had a discretionary portfolio of €8.5 billion at the end of June 2017. However, the fund had indicated to the department that it may not be able to deploy up to €2 billion. The fund has a mandate to invest in a manner that supports economic activity and employment in Ireland.

That is because its investments are typically dwarfed by high levels of co-investment from private groups, while drawdowns on commitments are often slower than initially estimated.

Meanwhile, ISIF has been experiencing some returns of capital at a faster-than-expected pace, according to the report.

In addition, the department identified a further €1 billion that could be released by ISIF, stemming from dividends paid by 71 per cent State-owned lender AIB as well as plans by the exchequer to replace some €450 million of loans given by the fund to Irish Water.

“On the basis of a need to improve economic competitiveness and growth, there is a strong justification for using the excess ISIF funds to increase infrastructure investment, contingent on inflation pressures being controlled,” the report said.

“However, an increase in capital expenditure should not come at the expense of the creation of a rainy-day fund, which could be used to address the significant external risks faced by the State.”

Last February, Taoiseach Leo Varadkar announced a plan to spend €116 billion, mainly over the next decade, on upgrading the State’s infrastructure and moving the Republic to a low-carbon economy.

The department report said that there “remains an important role for ISIF as a strategic and catalytic investor” as the banking sector and funding markets are more “risk-averse” than they were before the 2008 financial crisis. ISIF’s investments in businesses and projects help attract private investors, who typically co-invest to the tune of 2.9 times the money the fund commits, it said.

“ISIF is also achieving economic impact as demonstrated by the significant employment numbers supported and gross value added,” it said.

ISIF also has a portfolio of “directed” investments in bailed-out banks, which was worth €11.2 billion as of the middle of last year and controlled by the Minister, according to the report.