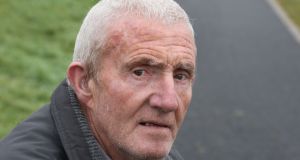 Michael Mackey in Galway: ‘There may be more money for emergency accommodation, but it is homes that need to be built.’ Photograph: Joe O’Shaughnessy

Michael Mackey who has worked for many years with Galway Simon believes landlords are the “big winners” in the budget .

Mr Mackey (65) has experienced homelessness, previously sleeping regularly under two boats in Galway’s Claddagh, where he is originally from.

When he listened to Minister for Finance Paschal Donohoe’s promise to bring forward “the full removal of the restriction on the amount of interest that may be deducted by landlords in respect of loans used to purchase, improve or repair their residential property” his heart sank.

“The landlords will benefit, and there is no will by this Government to recognise that there are families becoming homeless who were never in this situation before,” he says.

“Yes, there may be more money for emergency accommodation, but it is homes that need to be built,” he says. “There is not the will there to make sure that really happens,” he says.

Mr Mackey resolved to give up drinking more than 10 years ago, and has worked for Galway Simon. He has been a board member of the non-governmental organisation until recently. During the 20 years he lived on the streets, he spent time with people who had lost all trust in society.

He does not believe the supply of family hubs is a solution to moving families out of emergency accommodation in hotels.

“Just where I live in the Westside in Galway, there are 16 fabulous houses which are empty, all of them owned by the local authority,” Mackey says.

“I raised this at a meeting with Minister for Housing Eoghan Murphy at a meeting last year and he told me they were part of a strategy. What strategy, though?”

Mr Mackey also believes the issues of housing and homelessness are too complex for one department, and that there has to be a serious response involving all Government departments and stakeholders.

“It has to be declared a national emergency,” he says.

Cope Galway, which works the homeless in the western capital, says its recent census shows the situation is far worse than portrayed in official figures.

Its most recent quarterly one-day census conducted on September 20th to 21st 2018, identified 199 adults and 197 children as living in emergency accommodation – provided directly by Cope Galway and in hotels and bed and breakfasts.

Of this figure 86 were families, it says, noting that its figures contrast with the Department of Housing’s reported figure of 68 homeless families in the entire west region of Galway, Mayo and Roscommon in late August.

“We welcome the commitment of 10,000 new local authority homes next year, but we need to see bricks and mortar in Galway, not just acquisition and leasing,” Cope Galway chief executive Jacquie Horan says.

“We also welcome the increase in the budget for mental health services, and for early childhood interventions, as we have been trying to shine a light on the impact of domestic abuse on children,” Ms Horan said.

“But while the Government is trying to move people out of hotels into family hubs, and while hubs may be better than hotels, we would say that a family hub is not a home,” she noted.