Stability or openness: can China now manage both? 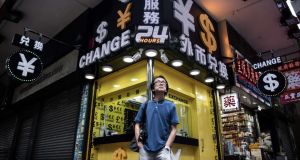 The last few weeks, with heavy Chinese government intervention in the stock market and now in the currency markets, have offered a lesson in how the complicated, often arcane, occasionally thrilling and never dull world of capitalism with Chinese characteristics, or socialism with Chinese capitalism, works in practice.

Having overseen the greatest story of economic expansion in recent history, it has long been said that the real test of the Communist Party’s popularity would come when the economy starts to slow.

Investors are now asking whether the devaluation of the renminbi is a sign that China’s economic situation is worse than previously expected. They asked similar questions when the stock market was losing 15 times Greece’s GDP in market cap in a few days, and the government made some pretty heavy-handed interventions to put a decent gloss on the correction.

The property market remains too weak to prop up the builders, a key sector, just as in Ireland in recent years. Consumer spending, despite positive figures in services, remains relatively weak. The financial services sector is licking its wounds after the stock market collapse.

Now the yuan, aka the renminbi, is experiencing its biggest fall in decades, and the People’s Bank of China has intervened repeatedly to keep the currency stable, following its usual policy of tightly managing it, while simultaneously saying it wants to reform and open up the market. Can it do both?

For many years these have been theories, marrying Marx and Milton Friedman, largely untested because of the booming economic miracle that is the emergence of China in the nearly four decades since the demise of Chairman Mao Zedong and the rise of the entrepreneur in the shadow of the ruling Communist Party.

Now that the economy is slowing to its most sluggish pace in three decades, President Xi Jinping is facing his biggest challenge yet as he and Premier Li Keqiang, who is charged with managing the economy, try to keep growth on track while staying true to pledges to reform the economy.

The government’s decision to allow the markets to have more influence on the yuan prompted the biggest sell-off in 21 years. People’s Bank of China assistant governor Zhang Xiaohui told a rare news conference in Beijing that the central bank would always be there to back up the yuan, only intervening when the market was “distorted” and saying adjustment to the daily reference rate was “basically already completed”.

Comments at a news briefing by deputy governor Yi Gang, who also runs the State Administration of Foreign Exchange, were Friedmanesque, like something out of a Ronald Reagan election flyer: “Trust the market, respect the market, fear the market, and follow the market.”

Then Yi became slightly more socialist in his tone. The current exchange rate level was consistent with economic fundamentals, and a flexible exchange rate will increase room for the central bank to adjust monetary policy. “Now, liquidity is ample and interest rates are stable on the market.”

To bring the spot rate to the required level one imagines that the PBoC is digging into its reserves – it spent nearly $20 billion to intervene on one day this week.

While this may not make much of a dent in China’s $3.65 trillion (€3.28tr) reserves, it is not a sustainable approach. Last month China released its first ever monthly report on its legendary hoard of foreign reserves, showing that they fell by $43 billion (€38.62bn) in July.

Look at some of the challenges: China’s currency has appreciated by almost 50 per cent in in real effective terms against its trading partners since 2007, and by 14 per cent between early 2014 and early 2015.

Money is flowing out of China, but the People’s Bank of China is keen to keep the value of the yuan stable as part of its plans to make it more international and position its currency among the International Monetary Fund’s basket of reserve currencies, known as Special Drawing Rights, which it uses to lend to sovereign borrowers.

The IMF has said China’s move to make the yuan more responsive to market forces is a welcome step.

“Greater exchange rate flexibility is important for China as it strives to give market forces a decisive role in the economy and is rapidly integrating into global financial markets,” it said.

Lei Mao, assistant professor of finance at Warwick Business School, said: “The PBoC has now explained that officially the recent devaluation of the renminbi has been market driven. This is because there used to be a difference between the exchange rate set by the PBoC and the actual rate the market demanded. And according to the officers, after these days’ adjustments this difference is almost traded away, resulting in a more acceptable level for traders.”

Reading the tea leaves on the leadership’s intentions is tricky. Premier Li said not so long ago that he believed the yuan was stable against the dollar and he did not want to see further devaluation as it would “ultimately lead to trade protectionism and impede the globalisation process”.

HSBC’s global research team is, meanwhile, focusing on the importance of reforms and how policymakers are sticking to them.

“Even amidst volatile market conditions in recent months, policymakers persevere with their capital account convertibility agenda,” they wrote.

One of the most enjoyable studies of late said that China could grow more quickly by 2036 if Chairman Mao Zedong’s policies were brought back.

While the Great Helmsman is seen as a hindrance rather than a help, who oversaw the collectivisation catastrophe of the Great Leap Forward and the political nightmare of the Cultural Revolution, a study co-authored by Yale economist Aleh Tsyvinski finds that getting rid of the private sector in China would not make much difference to Chinese GDP growth going forward.

And one of the funniest headlines on the current turmoil in China’s financial markets, which focused on the contradictions in the state bank’s behaviour in recent days, lay atop a piece on Bloomberg by Justin Fox: “Maybe China doesn’t have a master plan.”