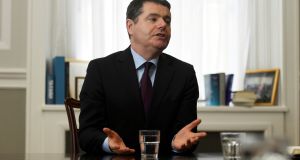 The only tax break that should be considered in the upcoming budget is to allow middle income earners pay more of their taxes at the 20 per cent standard rate, the author of a new report argues, as he urges the Government to avoid “pandering to populist pressures” come October 9th.

Economist Jim Power, author of a new economic outlook for Friends First, says the Government should play it safe in October’s budget and focus on labour supply and competitiveness rather than going down the road of “fiscal electioneering” by offering generous tax cuts.

Playing down concerns that the economy is overheating, Mr Power said consumers were still cautious about spending, and when energy and housing costs were stripped out of inflation figures they were “not indicative of a consumer that’s on fire”.

“Housing is the biggest economic issue at the moment,” said Power, adding that it’s “soaking up more and more household expenditure, and that’s not a good situation”.

Nonetheless, he does argue that stimulus should be limited, even when it comes to offering tax relief to consumers.

“My perspective on tax reform is that we should not make any changes to USC [universal social charge],” he said, arguing that narrowing the tax base, as has been seen in recent years by taking more people out of the USC tax net, is “not a good idea”.

“The only thing they should do on the personal tax side is to broaden the bands,” he said. This would allow people on moderate incomes to pay more tax at the lower, 20 per cent rate of tax.

“This would be well affordable within the so-called fiscal space,” he said.

Mr Power is also hesitant to recommend further stimulating the wider economy, arguing instead that the Government needs to concentrate on restoring competitiveness.

“The key priorities in budget 2019 should be to ensure that not too much stimulus is given to the economy and that competitiveness is the guiding principle,” he said, adding that budgetary measures should focus on improving labour supply.

Power wants the Government to rein in spending in the budget, noting that Ireland’s level of real debt is still “dangerously high”, which means it’s difficult to see how it could afford any expansionary fiscal policy.

Moreover, the Government only has a very small pot to play with, given that of the €3.4 billion budget day package available under the fiscal space, about €2.6 billion is already committed, with just €800 million left for tax changes and expenditure increases.

Ireland is also facing multiple threats, including the lack of a diversified economic model and its overdependence on a small number of multinationals.

“We cannot ignore the fact that the top 10 per cent of firms in Ireland account for 87 per cent of value-added in manufacturing and 94 per cent in services; a third of total exports are accounted for by just five firms and 39 per cent of corporation tax is paid for by the top 10 companies. Any shock to these firms or sectors would reverberate throughout our economy and undermine the positive growth achieved,” he said. As such, Mr Power said Government needed to do “as much as possible” to support the rest of the economy, particularly indigenous companies.

The UK’s departure from the European Union also poses a major potential risk.

“The Brexit scenario continues to unfold in a very unfavourable, if not alarming, manner and sterling is under considerable pressure. Budgetary policy should be guided by these realities and not by the temptation to pander to populist pressures,” Mr Power said.

1 Ireland has EU’s most progressive tax system, study finds
2 MEPs reject Central Bank’s Gerry Cross for key banking role
3 Davos: OECD confident on digital tax deal as France takes swipe at Ireland
4 Who are Ireland’s 17 billionaires?
5 On your bike: Dropbox backs Dublin Cycling Campaign
6 Aldi to implement living wage for store employees
7 Are there annual limits on inheritances or gifts to a child?
8 Fianna Fáil may have just pressed the pause button on the property market
9 Will there be enough cash to meet the parties’ election promises?
10 Total and Tullow launch joint sale of stakes in Kenyan oil project
Real news has value SUBSCRIBE