Rents up by 8.2% but inflation slows in Cork and Dublin 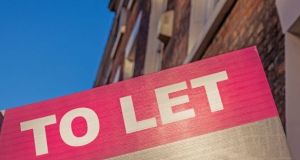 Minister for Housing Eoghan Murphy has insisted the Government’s policy of rent caps is working, as new figures show rents increasing nationally but stabilising in Cork and Dublin.

Rents rose by more than 8 per cent nationally in the third quarter compared with the same period a year ago, but there is evidence of stabilisation in the State’s two biggest cities.

On a quarterly basis, rents were up 3.3 per cent compared with the second quarter, according to the Residential Tenancies Board (RTB).

Its figures, which are compiled in conjunction with the Economic and Social Research Institute (ESRI), are based on actual rents paid on more than 21,236 tenancies registered with the board.

In Dublin, the average rent increased by €110 or 6.6 per cent year on year to €1,762, still above the rent pressure zone (RPZ) cap of 4 per cent. However, this marks a decline from the 9.6 per cent growth rate recorded for the same quarter a year earlier and is the lowest annual increase since the fourth quarter of 2017.

Rents in Cork city also rose by a slower pace in the July to September period, climbing 1.4 per cent to €1,192, the lowest growth rate since the third quarter of 2015.

“This latest RTB rent index report shows a mixed picture,” he said. “Rental prices are still too high. However, I welcome the signs of stabilisation in most of our cities, confirming that rent pressure zones are working to dampen inflation.”

He added that councils would be directed to inspect the level of rent paid as part of “the tenancy inspection process”.

RTB director Rosalind Carroll said while affordability still remained an issue in Dublin, which accounts for about 40 per cent of all tenancies, the fall in growth rate both in the capital and Cork is a sign that the pace of increase may be stabilising in the areas which have been RPZs the longest.

“It is encouraging to see initial signs that RPZs are having a dampening effect on rents, and we hope to see similar stabilisation occur in other areas over time,” she said.

“We also expect to see some stabilisation in future quarterly reports, particularly outside Dublin, as this sample reflects recent legislative changes which now require landlords of student-specific accommodation to register their tenancies with the RTB.”

1 Who are Ireland’s 17 billionaires?
2 Are there annual limits on inheritances or gifts to a child?
3 Fianna Fáil may have just pressed the pause button on the property market
4 My father in a nursing home wants to gift me his house
5 UK to prioritise EU trade deal over one with United States
6 O’Flynn ‘very unhappy’ with extra payments to former employee, court hears
7 Eason puts Blanchardstown store on market at €16m
8 IDA chief says State could soon ‘be fighting for a smaller pool’ of foreign investment
9 DNA collection company Genomics Medicine Ireland reports €37.7m loss
10 Seamus Coffey decides against second term as chair of fiscal council
Real news has value SUBSCRIBE